Wednesday, February 10, 2016
Jennifer Marshall, a sought-after political researcher and vice president of The Heritage Foundation, will speak at Cedarville University chapel on Thursday, Feb. 11 in the Jeremiah Chapel.

Founded in 1973, The Heritage Foundation is a research and educational institution that promotes conservative public policies based on the principles of free enterprise, limited government, individual freedom, traditional American values and a strong national defense.

As vice president, Marshall runs the think tank’s Institute for Family, Community and Opportunity, which explores how moral values and civil society play a role in political and societal issues in America.

She also serves as the editor for Heritage’s annual Index of Culture and Opportunity, which tracks key social and economic trends to help determine whether opportunity indicators in America are on the right track.

In 2010, Marshall was named by the National Journal as one of Washington, D.C.’s 20 “power players” for her work on school choice and other education reforms.

Before joining Heritage in 2003, Marshall worked on cultural policy issues at Empower America, a free-market think tank. Before that, she was the senior director of family studies for the Family Research Council.

She has appeared in numerous media outlets including C-SPAN and PBS. She also authored the book “Now and Not Yet: Making Sense of Single Life in the Twenty-First Century,” a look at the cultural, practical and spiritual issues that face young women in America.

Marshall earned her bachelor’s degree from Wheaton College, as well as master’s degrees from the Institute of World Politics and the Reformed Theological Seminary. In addition to her vast experience in political research, Marshall also taught at an American school in Lyon, France, after graduating from Wheaton.
All chapel messages are streamed live at www.cedarville.edu/chapel/live, or through the Cedarville Chapel app on Apple TV. A complete archive of past chapel messages is also available at www,cedarville.edu/chapel/archive.


Located in southwest Ohio, Cedarville University is an accredited, Christ-centered, Baptist institution with an enrollment of 3,711 undergraduate, graduate, and online students in more than 100 areas of study. Founded in 1887, Cedarville is recognized nationally for its authentic Christian community, rigorous academic programs, strong graduation and retention rates, accredited professional and health science offerings, and leading student satisfaction ratings. For more information about the University, visit www.cedarville.edu. 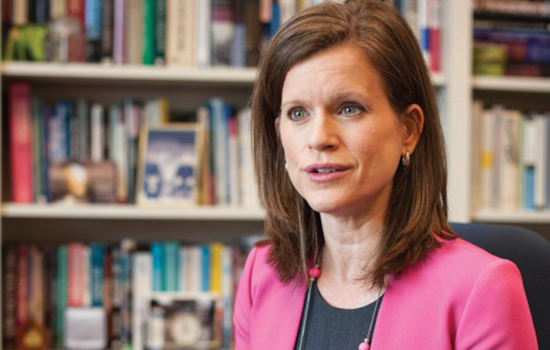 Jennifer Marshall, vice president of The Heritage Foundation, will speak in chapel on Feb. 11.