Friday, October 16, 2015
A community forum to discuss the impact marijuana would have in Ohio, if the proposed Issue 3 is passed, will be held at Main Elementary School on Dayton-Xenia Road in Beavercreek on Thursday, Oct. 22. The event, which is open to the public and free of charge, begins at 7 p.m.

Neal will focus her comments on how marijuana affects mental health, and Pinkerton will center his remarks on medical marijuana, and Wheeler will talk about the legislation from an economic perspective. The final two panelists--DeWine and Fischer--will address the potential impact on crime and monopolies.

After opening remarks by all panelists, the forum will be opened to include questions from the audience.

“The purpose of the forum is to bring information from various perspectives to residents in the Miami Valley about Issue 3," said Mark D. Weinstein, executive director of public relations for Cedarville University. "Although some have already voted, our hope is through this forum, residents will better understand the benefits and concerns about the use, and impact of marijuana issue. An educated vote on this important issue is critically important."

Neal has taught at Cedarville University since 2008. She earned her Doctor of Nurse Practitioner degree from the University of Cincinnati. Pinkerton joined the faculty in 2014 after many years in private practice—including in Colorado where marijuana is legal.  His Doctor of Medicine degree is from the Medical College of Ohio in Toledo. DeWine currently serves as Ohio's attorney general, while Fischer is the Greene County Sheriff. 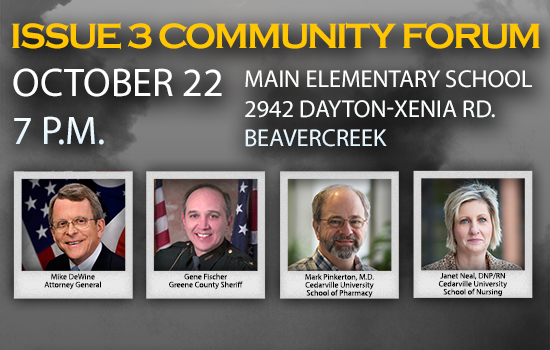 A community forum on the impact of marijuana will be held on Oct. 22 at Main Elementary School.