Inaugural Pharmacy Hooding Set for May 6

Friday, April 29, 2016
After a decade of planning, transformation and growth, the Cedarville University School of Pharmacy will recognize its first Doctor of Pharmacy (Pharm.D.) graduates during a hooding ceremony on Friday, May 6, at 10 a.m. at Grace Baptist Church in Cedarville.

A total of 48 students comprise the inaugural graduating class. Marc Sweeney, Pharm.D., the founding dean of the school of pharmacy, will lead the ceremony. The pharmacy graduates will be part of the 761 students who receive their degrees at the university’s 120th commencement ceremony on Saturday, May 7 at 10 am in the Doden Fieldhouse.

Cedarville’s pharmacy program is a three-year pre-pharmacy and four-year graduate study that provides the majority of students earning a Bachelor of Science in Pharmaceutical Sciences and all earning Doctor of Pharmacy degrees.

“We have been well-equipped by the school of pharmacy to step out as Christian pharmacists and serve in a manner that will not only provide excellent patient care, but also reflect the love of Christ.”

A hooding ceremony symbolizes students’ completion of their doctoral degree studies. Students earning their Pharm.D. will be awarded an olive green hood to be worn with their full academic regalia.

“The ceremony is significant because it is an opportunity for the faculty from the school of pharmacy to recognize the work and accomplishments of those graduating with a doctoral degree,” said Sweeney. “Earning the Doctor of Pharmacy degree, which requires four years of graduate work, is a significant accomplishment and is worthy of public recognition.”

The hooding ceremony marks a milestone in the history of a program that began in 2009. Today, the pharmacy program has 168 students enrolled in the doctoral program and 115 students in undergraduate pharmacy classes.

“The pharmacy program began with a computer, an office, and a vision, but has grown to include a new state-of-the art building, nationally recognized faculty, committed staff, practice labs and a network of professional pharmacists,” said Sweeney. “It is exciting to see substantial growth in the school of pharmacy and I am eager to see where God will take the program.”

Juanita Draime, a fourth-year professional pharmacy student from Dayton, Ohio, serves as vice president of the graduating class and is proud of the seven-year journey her classmates have completed.

“We have been well-equipped by the school of pharmacy to step out as Christian pharmacists and serve in a manner that will not only provide excellent patient care, but also reflect the love of Christ,” said Draime.

Upon graduation, Draime will stay at Cedarville to complete a two-year academic fellowship – the first of its kind at Cedarville.

Cedarville’s first crop of pharmacy graduates has already secured an impressive list of residency opportunities and full-time jobs. Graduates have accepted offers for residency programs at some of the nation’s top hospitals, such as the Mayo Clinic in Rochester, Minnesota and Nationwide Children’s Hospital in Columbus, Ohio.

A total of 79 percent of this year’s graduates who applied for a residency were matched with a program. The national average for match rate is just 66 percent, according to American Society of Health-System Pharmacists (ASHP).

In addition, several graduates have already secured positions as full-time pharmacists, such as Kurtis Schultz (Cincinnati, Ohio), who will work for CVS Pharmacy in Dayton.

“Cedarville University’s School of Pharmacy has prepared me for my career by giving me the practical experiences that I needed to excel,” said Schultz. “The faculty and staff have taught my classmates and me to strive for the best, because that is what Christ expects of us.” 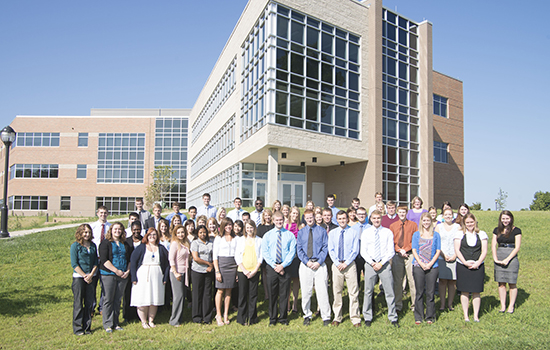 Cedarville's first pharmacy graduates will be recognized at a special ceremony on May 6.