Inversions to Appear on International Album

Wednesday, October 7, 2015
Cedarville University’s a capella group, The Inversions, has been chosen to appear on the competitive “Voices Only 2015” album. Voices Only is a two-volume scholastic a cappella compilation comprised of selected tracks released by various collegiate and high school groups from around the world.

The Inversions is a coed student organization founded in 2012 and currently has 19 members. Since its founding, the group has released two full-length EPs. Their a capella vocal mix encompasses a wide variety of genres including pop, rap, R & B, alternative, rock and spiritual.

The Voices Only organization accepts hundreds of submissions every year, and being selected to appear on the album has become a valuable mark of accomplishment in the collegiate a cappella community.

“‘Voices Only’ is giving us the opportunity to get our name past the realm of Cedarville, Ohio, and into the ever-growing international phenomena of collegiate a capella,” said Robert Rhodes, senior Inversions member from Suffolk, Virginia.

Each album includes songs recorded, mastered or released during the previous year. Voices Only includes not just the "best" a cappella tracks, but the finest mix of songs, each chosen for their use of soloists, production, arrangement and innovation.

The Inversions are featured on the first volume of “Voices Only 2015.” The a cappella group altered and reproduced the song “Stay,” originally sung by popular pop artist Rihanna featuring Mikky Ekko. The recording was originally created for the groups’ EP “All Along,” released in April 2015.

“Our recording of ‘Stay’ feels and sounds like a very distinctive track contrasting each song our group has ever done. It takes a well-known record and changes the tune from simplicity to complexity, all while adding a choral element to the studio duet,” said Rhodes.

The Inversions’ EPs “All Along” and “The Inversions” are available on iTunes and in the Cedarville University bookstore. 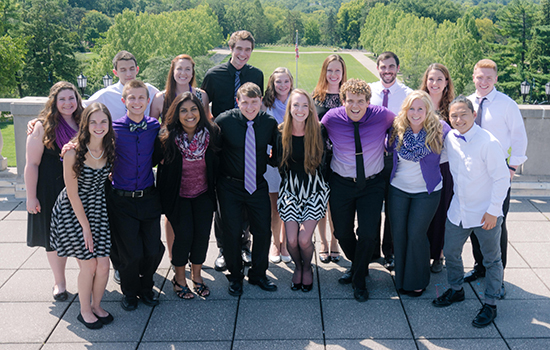 The Inversions will appear on "Voices Only 2015", a collection of songs from a capella groups around the world.