Monday, February 8, 2016
Third-year professional pharmacy student Jordan Long (Chillicothe, Ohio) of Cedarville University is one out of just four pharmacy students from across the nation to be chosen for the American Pharmacists Association (APhA) Student Leadership Award.

The awards are provided by Procter & Gamble, a consumer goods company based out of Cincinnati. Long will be presented his honor at the 2016 APhA-ASP awards ceremony during the APhA Annual Meeting & Exposition in Baltimore from March 4-7, 2016. Each recipient will also receive a $500 scholarship with the plaque.

“I did not expect to receive this award,” Long said. “There are so many remarkable students around the country that are involved in APhA-ASP that could have been chosen; I am honored to receive this award in light of that fact. I cannot thank APhA-ASP and my fellow members enough for all their support over the years. It makes me feel fortunate that I have been given the many opportunities that allowed me to receive this award by Cedarville University, its faculty and, most importantly, God.”

Beginning in 1983, the APhA Student Leadership Award has been given to students based on outstanding academic achievement and leadership skills.

Nominees for this award must be members of the APhA-Academy of Student Pharmacists (ASP), be in their second-to-last year at a school with accreditation status, and have a minimum 2.75 grade point average.

Long was nominated by fellow APhA-ASP member and second-year professional pharmacy student Danielle Baker (New Castle, Indiana). Baker serves as the president-elect for the Cedarville chapter of the APhA-ASP.


Located in southwest Ohio, Cedarville University is an accredited, Christ-centered, Baptist institution with an enrollment of 3,711 undergraduate, graduate, and online students in more than 100 areas of study. Founded in 1887, Cedarville is recognized nationally for its authentic Christian community, rigorous academic programs, strong graduation and retention rates, accredited professional and health science offerings, and leading student satisfaction ratings. For more information about the University, visit www.cedarville.edu. 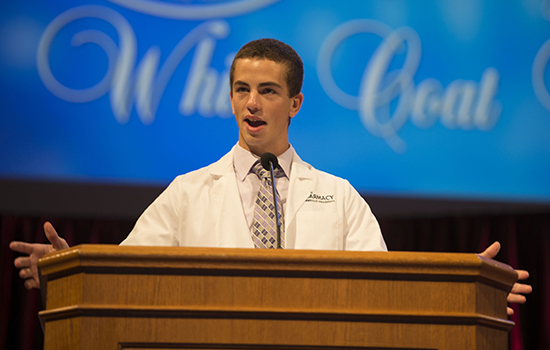 Jordan Long has been named as an APhA student leader.