“This is certainly going to be challenging, but I’m really looking forward to building upon the great foundation we have in the department.”

Smith begins his new duties July 1, 2016, for the start of the 2016-17 academic year. He will continue teaching and serving as the director of the Center for Political Studies.

“This is certainly going to be challenging, but I’m really looking forward to building upon the great foundation we have in the department,” said Smith. “Dr. Mach, along with other past chairs such as Murray Murdoch and David Rich, has done a fantastic job building our program.”

As the new chair of history and government, Smith will be responsible for the overall direction of the department, including student engagement and internal program reviews.

“We’re definitely going to put an increased focus on our digital media efforts,” said Smith. “We’ll do that through blogs, podcasts, videos and other avenues. It’s important to engage students where they are and the digital realm is the best way to reach them.”

Smith also hopes to increase stand-alone experiences for students outside the classroom, such as study-abroad opportunities. The new programs will complement Cedarville’s current D.C. Semester program.

"It's very important to give our students unique, off-campus opportunities that will help them become even more competitive as they enter the job market or seek post-graduate education,” said Smith.

Smith has been at Cedarville since 2004, and is a highly sought-after political commentator. During the 2015-16 academic year, he’s appeared in more than 140 interviews around the country on topics such as the presidential election and the Supreme Court. 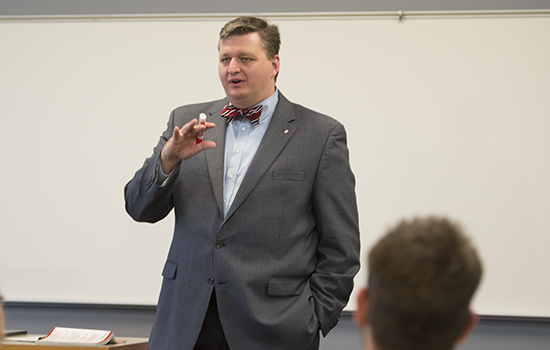 Mark Caleb Smith has been named the new chair for the department of history and government.