The honor is the second-straight for Cedarville, which also earned Outstanding Delegation at least year’s competition in New York. This year’s conference marked the sixth time that Cedarville students have participated in the event.

“Model U.N. has been a great experience for me,” said second-year team member Tyler Hanley, a junior political science major from Pekin, Illinois. “The experience has provided me with the opportunity to interact and work with students from Cedarville and around the world, while also applying lessons from the classroom.”

During the event, which took place from March 27-31, Cedarville’s team of 14 students acted as representatives from the Central African Republic. The team participated in various foreign policy discussions in mock committee settings, practicing their negotiation and policy-making skills.

“The experience has provided me with the opportunity to interact and work with students from Cedarville and around the world, while also applying lessons from the classroom.”

More than 4,000 students from six continents and over 100 universities participated in the conference, which featured forum issues such as peacekeeping, human rights, the environment and a number of other social and economic issues.

Each team is assigned a different country for the event and is responsible for understanding its country’s profile, as well as how to best represent its nation in the complex variety of issues.

"Over the course of the competition we remained diplomatic through intense international negotiations, learned more about the complex U.N. system and viewed the international community from another country's viewpoint,” said second-year team member Spencer Woody, a senior political science major from Byron, Georgia.

Outside of conference sessions, competitors were given the opportunity to tour the United Nations headquarters in Manhattan, as well as visit many of New York’s world-class museums, restaurants and other landmarks.

Prior to attending the conference, team members must submit a position paper to be judged on the level of analysis, research and accuracy in representing the team’s assigned country.

"The team relies heavily on the work of the co-captains and veteran team members, so I am especially grateful to those who stepped up so well this year,” said Glenn Duerr, Ph.D., assistant professor of international studies and team adviser. “I am also highly impressed with all of the new members who adapted to the rigors of the competition and helped the team in many different ways." 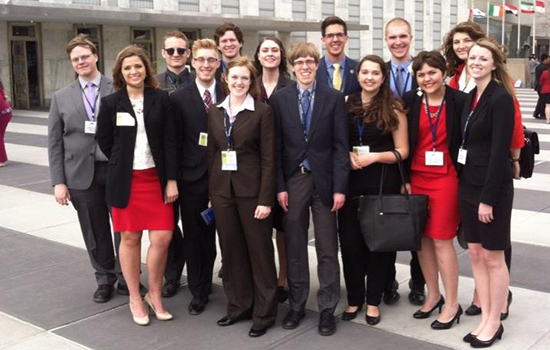