Hitchcock, a native of Chesapeake, Virginia, serves as Cedarville’s resident composer for all University theater productions and this summer, he’ll return to Pittsburgh, Pennsylvania, to make his mark in his second go-round with the Pittsburgh New Music Ensemble.

The Pittsburgh New Music Ensemble, which is celebrating its 40th anniversary this year, features some of the top musicians from around the world who come to the Steel City for an immersive summer experience that features eight concerts at Pittsburgh’s famous City Theatre.

Hitchcock will spend a second-straight summer as an intern under the supervision of Kevin Noe, executive artistic director and conductor of the Pittsburgh New Music Ensemble. Last summer, Hitchcock had the honor of composing and premiering an original score with the Ensemble, which received praise from the Pittsburgh Tribune-Review.

“I think my favorite part of composing is creating something new, always striving for originality,” he said. “I want to be a part of making somebody feel something deeply, and I’ve had many opportunities to do that by creating the music for Cedarville’s theater program. I’ve learned how to capture the moment through music and have been given ample opportunity in which I’m allowed to create and experiment.”

No stranger to accolades, Hitchcock received a certificate of merit at the Kennedy Center American College Theater Festival in 2015 for his original piece “Incidental Music for Doubt” for solo clarinet, which premiered as a part of Cedarville’s theatrical production of “Doubt: A Parable” during the 2015 spring semester.

“Calvin is a student always full of surprises, and this opportunity is definitely a real win,” said Austin Jaquith, D.M.A., associate professor of music theory and composition. “I wish him the best this summer as he works with this fantastic ensemble.” 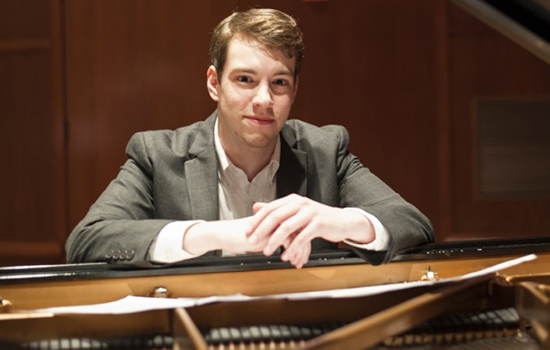 Calvin Hitchcock will spend his summer as an intern with the Pittsburgh New Music Ensemble.