Fourth-year professional pharmacy students John Van Schepen (DeMotte, Indiana) and Dan James (Fort Wayne, Indiana) comprised the top team in the Clinical Skills Competition (CSC). They will also travel to New Orleans from Dec. 5-6 to compete against teams from around the country at the American Society of Health-System Pharmacists (ASHP) national competition.

Clinical Skills Competition
For the CSC competition, two-member teams create a pharmacy care plan for a simulated patient. Each team is given a scenario of a patient with health complications as well as a collection of books, assigned by the national organization, to assist in determining a diagnosis.

Each team must first prioritize the patient’s health concerns and then develop a treatment plan. After the initial steps, students compose a written plan and make a 10-minute oral presentation to a panel of two or three judges.

“Last year was the first time any of our pharmacy students attended ASHP’s national competition,” said Jeb Ballentine, Pharm. D., associate professor of pharmacy practice and director of pharmacy practice lab. “John and Dan were the same students who represented us last year, but they were only in their third professional year and had limited experience with clinical skills. Now that they are further along in their training, I think they will have a greater advantage.”

This semester, James’ clinical experience has been primarily at hospitals in the Dayton area. He also completed an emergency medicine rotation at the Cleveland Clinic and recently completed a rotation focusing on family medicine at the Victor J. Cassano Health Center (Dayton, OH).

Van Schepen’s clinical rotation has placed him at Kettering Medical Center, where he assists with the trauma team.

The 2015 top 10 finalists at the ASHP CSC will receive an iPad Mini containing a one-year subscription to a prescription assistance database.

“It meant a lot to win the competition against so many other highly respected Ohio schools of pharmacy,” Arnold said. “It shows that the faculty at Cedarville are doing a great job educating the students and also shows that, although Cedarville’s pharmacy program is young, it deserves respect as well.” 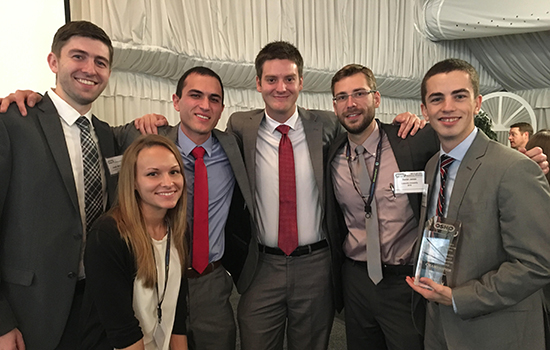