Friday, January 8, 2016
Martin Luther King Jr. Day has special meaning in our country. At Cedarville University, this year’s celebration will have extra significance as Rev. James D. Parker Sr., the first African-American student to apply — then enroll — at Cedarville, will speak in chapel.

Parker first put his feet on Cedarville’s campus in 1954. He departed his Portsmouth, Ohio, hometown for Cedarville University because he wanted to attend a college that allowed him to study the Bible. He didn’t understand at the time that he was making history.

Just four months earlier, the United States Supreme Court changed the course of history when it ruled in Brown v. the Board of Education that segregation in public schools violated the United States Constitution.

“I really didn’t think about the social issues that were going on at the time,” said Parker. “My focus was on getting an education grounded in biblical truth and pursuing my call to become a preacher.”

While Cedarville never had a policy that barred African-Americans from enrolling in school, it wasn’t until Parker and another student, Marshall Watson, stepped on campus that the University saw its first African-American students.

At the time, Cedarville’s policy was that all students must first meet with faculty and staff for approval before being admitted to the University. When asked if they thought Parker’s race was an issue, the group unanimously agreed that he belonged at Cedarville and should be admitted.

But one more hurdle had to be cleared when a survey of students found that some had concerns about a minority student being admitted. That’s when then-Cedarville president James T. Jeremiah stepped in and informed current students that Parker would indeed be attending, and anyone opposed should withdraw from the University.

“I never had a problem during my time at Cedarville,” said Parker. “Dr. Jeremiah had a lot to do with that. He made sure I was welcomed with open arms. He was a great man.”

Parker was no stranger to being a pioneer of sorts. In 1950, just one year after President Harry S. Truman issued Executive Order 9981, which abolished racial discrimination in the armed forces, Parker enlisted in the United States Air Force, where he served for four years.

After his time in the military, he felt called to attend a Bible college to prepare for ministry. Initially, he had his sights set on Moody Bible Institute, but saw an ad for Cedarville in Moody Magazine and decided he wanted to attend school closer to home.

Despite attending a predominantly white school during a time when racial tensions in America ran high, Parker flourished at Cedarville. He became an instant hit among his classmates, serving as vice president of the freshman class and sophomore class chaplain.

“I had my own room on campus, but I was never lonely,” he said. “I regularly had to kick the other guys out of my room so I could go to sleep. Everyone was always hanging out in my room.”

After spending decades in the ministry, Parker now spends his time as an instructor at the Central Baptist Institute in Syracuse, New York, an outreach of Central Baptist Church where his son-in-law, Rev. Milton Kornegay, serves as pastor.

“When I attended Cedarville, I prayed that God would send more African-Americans there to be trained to preach the Word to others,” said Parker. “One of the greatest joys in my life is being able to say that I’ve seen that prayer answered.” 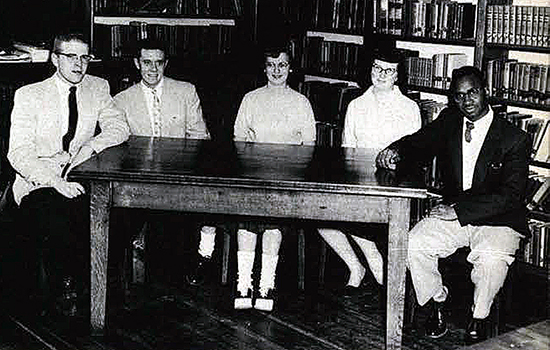