Wednesday, February 17, 2016
A group of student researchers at Cedarville University are hoping their recent work will prove to be innovative in the field of biological sciences. Led by Heather Kuruvilla, Ph.D., professor of biology, the researchers are studying Tetrahymena thermophila, a single-celled organism commonly found in freshwater ponds.

The research focuses on the presence of proteins in T. thermophila and their subsequent role as a chemorepellent in the organisms. Chemorepellents play a key role in both single-cell and multicellular organisms.


Chemorepellants and chemoattractants are responsible for cellular movement called chemotaxis, which is the movement of an organism in response to chemical stimulus. In single-celled organisms, such as T. thermophila, chemoattractants help the organism find food, while chemorepellants act as a warning that a predator may be near and help the organism move away from the threat.

The proteins that Kuruvilla and her team have found in T. thermophila are similar to the netrin family of proteins, which have roles in human development and cancer progression, and have previously only been seen in animals.

If the netrin-like proteins found in the T. thermophila do indeed mirror those found in animals, it would make research on cellular development much more accessible. In addition, netrins act as biomarkers in certain types of cancer, and it's possible that the study could lead to advances in cancer research.

"If what we’re seeing in T. thermophila can act as a substitute for those proteins, it would definitely open the door for more research into cellular development and cancer progression.” - Heather Kuruvilla, Ph.D., Professor of Biology

“It’s quite costly to get netrin proteins in hand to study,” said Kuruvilla. “But if what we’re seeing in T. thermophila can act as a substitute for those proteins, it would definitely open the door for more research into cellular development and cancer progression and could lead to many breakthroughs in the field.” 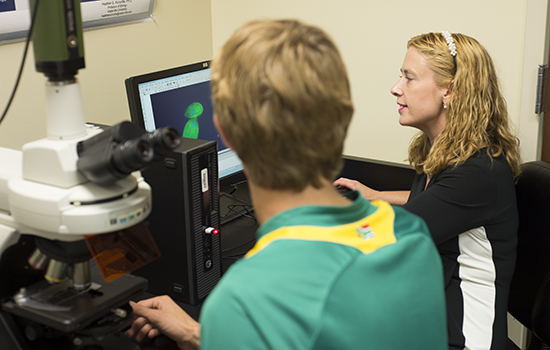 Dr. Heather Kuruvilla and a team of students are hoping to innovate biology research.