Wednesday, April 27, 2016
As a way to honor longtime faculty member Michael DiCuirci for nearly 40 years of service to Cedarville University, a group of donors have created a scholarship endowment in his name. DiCuirci, who serves as senior professor of music, will retire next month following four decades at Cedarville.

The scholarship was formally announced during DiCuirci’s farewell concert on Sunday, April 17. Allister Baldwin, a 1999 Cedarville graduate who was heavily influenced by DiCuirci during his time as a student, made the official announcement and presented the scholarship to its first recipient.

“I am gratified and very happy that Dr. Alister Baldwin, my family and many others have created a scholarship in my name for worthy instrumentalists,” said DiCuirci, senior professor of music.

Julia Brummel, a senior music education major from Sun Prairie, Wisconsin, received $2,000 as the first-ever recipient of the Michael P. DiCuirci Endowed Scholarship. Brummel was chosen by faculty from Cedarville’s Department of Music and Worship as this year’s recipient.

The scholarship will be awarded annually to a student who demonstrates financial need and is actively involved in a University sponsored musical performance group such as the brass choir, jazz band or symphonic band, among others.

Students do not have to be a music major, though priority is giving to those who are studying in the department of music and worship.

“Professor DiCuirci has an incredible legacy of service to Cedarville and its students,” said Amanda Gillispie, director of donor relations, scholarships and legacy gifts. “This scholarship is a wonderful way to honor the way in which he has impacted students during his time at Cedarville University.”

Those wishing to donate to the Michael P. DiCuirci Endowed Scholarship can do so by calling 1-888-CEDARVILLE (233-2784) or by visiting www.cedarville.edu/advancement/make-a-gift. 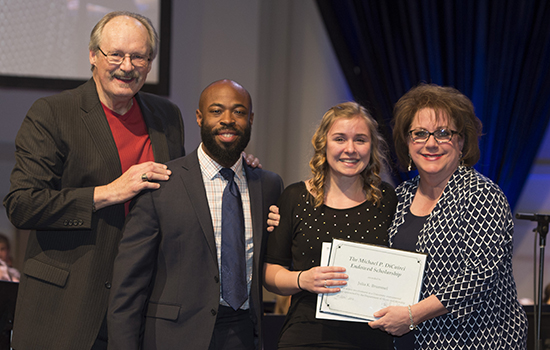 A scholarship has been created to honor the legacy of Michael DiCuirci.