The British Are Coming!

Wednesday, March 16, 2016
It’s no April Fools’ joke; the British are coming to Cedarville University! At least the music of some of Britain’s most beloved composers and performers. On Friday, April 1, a variety of performances by Cedarville’s talented music students and faculty will take place in the Dixon Ministry Center (DMC) beginning at 6:15 p.m.

Several prominent locations in the DMC will be transformed into iconic British venues such as Covent Garden Flower Market, Hyde Park, Royal Albert Hall and the Rose and Crown for a pre-show party.

“This year we really wanted to make it an immersive experience and draw the audience in.”

During the pre-show, guests will be treated to hors d’oeuvres, desserts and beverages and are free to roam Alumni Hall and Recital Hall, where eight different musical groups will perform an eclectic variety of music. Charles Clevenger, D.M.A., senior professor of music, will make a special appearance as a street artist and alumni can register to win his painting.

As part of the evening, the pre-show party will also feature a display of classic British sports cars outside the DMC, courtesy of the British Transportation Museum. In addition, the pre-show will also include a variety of street performers and soap-box actors outside the entrance of the Bolthouse Center for Music.

The program’s grand performance begins at 8:15 p.m. in the Jeremiah Chapel and will feature the University’s brass choir, the 140-voice combined choirs of the university, orchestra, symphonic band as they perform hits from the Beatles, Sir Elton John, Sir Andrew Lloyd Webber and other iconic British musicians.

Also included in the performance will be selections from the soundtracks of the popular Harry Potter and James Bond films. The jazz band will wrap up the evening with an after-party concert in Recital Hall at 10 p.m.

Susan Plemons, M.M., assistant professor of worship and one of the event’s planners, wanted to change the way students experienced the Pops Concert. The concert has been redesigned to create an entire experience, involving attendees in multiple aspects of the performances.

“This year we really wanted to make it an immersive experience and draw the audience in,” said Plemons. “We have a multitude of experiences to engage with the audience throughout the night.”

Tickets are required for the event and can be picked up at will-call beginning at 6:30 p.m. at the DMC; there will be no mailing of tickets prior to the concert.

Admission is $15 for adults, $7 for students, and $5 for children. Tickets can be purchased by visiting www.cedarville.edu/artsmadness.

For more information, contact Susan Plemons at susanplemons@cedarville.edu or 937-766-7728. 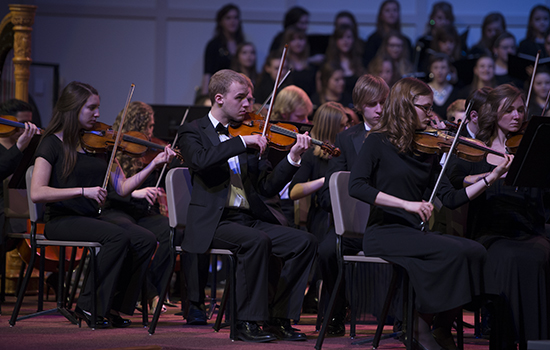