Thursday, April 20, 2017
Cedarville University graduates make their way into countless opportunities, and sometimes that means landing a spot on America’s favorite quiz show. Emmett Robinson, who graduated from Cedarville in 2007 and Harvard Law School in 2011, recently was a contestant on “Jeopardy!” His taped appearance on the show aired April 19.

He won the April 19 show, moving from second to first, by correctly answering a law-related Final Jeopardy question. Robinson had the only correct answer. For good measure, he also snuck a “Hi Zeke” message to his nephew on the lower right corner of his answer screen.


"The hardest part of being on the show was using the buzzer. Hitting it at the right time is much harder than you would think."

The process to become a contestant on “Jeopardy!” begins with an online test offered once or twice each year. Those who pass the test are eligible for an audition, explained Robinson. If selected for an audition, contestants participate in a written test and a mock game of “Jeopardy!” to showcase their personality.

Robinson began taking the “Jeopardy!” online tests while he was a student at Cedarville University, hoping to participate in the College Championship.

“As a kid, I had always watched the show with my family, and as I got older I realized that I was able to answer some of the questions,” Robinson said. “I thought it would be fun to give it a try.”

While he was never invited to audition for the College Championship, Robinson continued taking the “Jeopardy!” online tests. In October 2015, he was invited to audition. Robinson traveled to Boston to compete with nearly 300 possible contestants. He was chosen a year later.

He was selected in December 2016, and one month later he traveled to Culver City, California, to tape the show. Several family members traveled with Robinson to watch in the studio.

“The hardest part of being on the show was using the buzzer,” Robinson joked. “Hitting it at the right time is much harder than you would think.”

Robinson will appear on the show again to defend his title on April 20. Check local listings for show time. 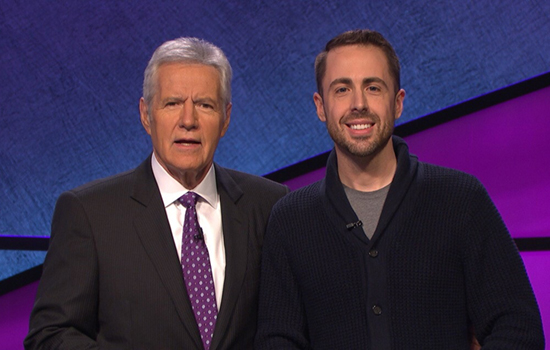