"Model U.N. has allowed me to apply lessons from the classroom and work together with students from around the world."

“One of the greatest privileges I have had at Cedarville is being co-captain with Tyler Hanley on the Model U.N. Team. Winning the award was a humbling experience, because it showed me how far I've come since starting Model U.N.,” said Holm.

“I am proud to have been a member of Cedarville's Model U.N. team for the past three years and am incredibly thankful for the opportunities and friendships that Model U.N. has provided me,” Hanley offered. “Model UN has allowed me to apply lessons from the classroom and work together with students from around the world.”

Christian Townsend, a senior from Indianapolis, Indiana, majoring in history and political science, won outstanding delegate to the UN Security Council. Corinna Ward, a junior double majoring in finance and marketing from Dayton, Ohio and Kuala Lumpur, Malaysia, won an honorable mention in this category.

"The Model U.N. is comprised of outstanding young men and women who represented Cedarville University with excellence,” said Duerr. “I would certainly characterize the performance of the entire team as outstanding given their energy, attention to detail, and exhaustive work throughout the entirety of the weekend." 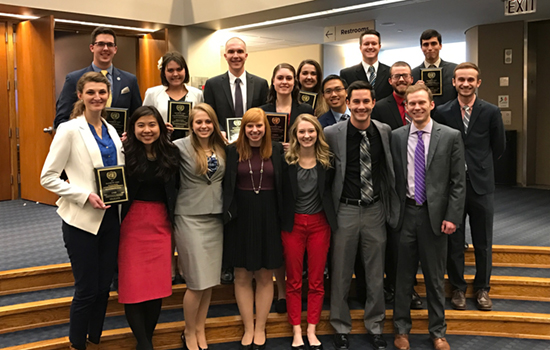