Friday, November 11, 2016
Starting a new ministry takes a significant amount of work, but for Cedarville University students Adrienne Krater and Claire Hoyt, taking part in a worldwide relief effort that brings hope and Christmas gifts to children makes all of the effort worthwhile. This fall, the two sophomores formed a new global outreach ministry on campus to support the work of Operation Christmas Child.

This year’s efforts will culminate with a campus wide event on November 11 to pack 1,000 shoeboxes. Krater and Hoyt hope this year’s “packing party” will attract people from around campus to the work of Operation Christmas Child.


"We just wanted to bring this to Cedarville so the students here can see what an impact it makes on the world."

Operation Christmas Child is a project of Samaritan’s Purse, an international relief organization. Its mission is to send shoeboxes filled with school supplies, hygiene items and small toys to ministry partners around the world who then distribute them to children in their communities and use the gifts as a platform to share the Gospel.

Both Krater and Hoyt have been involved with Operation Christmas Child since they were young and have a passion for bringing others in to join the effort. In 2015 they volunteered at the regional office in Xenia, Ohio, but this year they decided to focus their work on campus.

“We just wanted to bring this to Cedarville so the students here can see what an impact it makes on the world,” Krater said. “And hopefully they’ll want to make that impact themselves.”

With no budget for their effort, Krater and Hoyt have teamed up with eight other students to gather donations for the project. Their goal for the year is to pack 1,000 shoeboxes with items donated by Cedarville University students, faculty and staff. The group has also reached out to various businesses, churches and individuals to ask for supplies to fill the shoeboxes.

“Prayer is the key through all of this,” Hoyt said. “It’s easy to worry about not getting enough supplies or not having money for what we need, but God keeps providing.”

Hoyt hopes the student body sees that Operation Christmas Child isn’t just about packing shoeboxes. The effort impacts people around the world all year long and has changed the lives of countless children who received the simple gift of a shoebox.

As the group continues gathering supplies, they are looking for gently used stuffed animals and clothing items, as well as financial donations to help pay for shipping the boxes. Krater and Hoyt can be contacted at akrater@cedarville.edu and cehoyt@cedarville.edu. 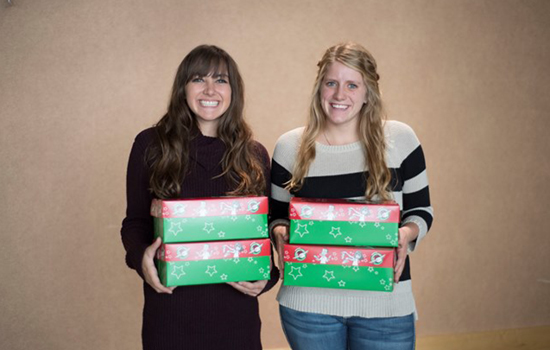 Adrienne Krater and Claire Hoyt have organized a drive to pack 1,000 shoeboxes for Operation Christmas Child.