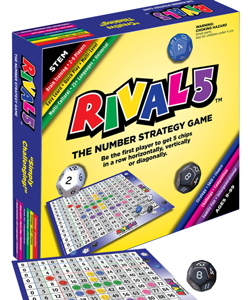 Equations like 1 + 1 = 2 and 2 x 2 = 4 have simple answers. But sometimes equations are more complex. For one Cedarville University graduate, 18 years of teaching + a class of incarcerated adult students = a new, award-winning number strategy game.

Martin began teaching at the State Correctional Institution in Chester, Pennsylvania, in 2000. For the past 18 years she has taught male, adult learners General Educational Development (GED) basic education classes. She also initiated five different parenting programs for inmates to maintain correspondence with their children.

“I never planned to go into prison work,” said Martin. “But I feel like I can have an impact in the students in the way I handle situations, and I take whatever opportunities I can to share Christ.”

“A definite reward for me has been seeing math-averse children and adults become math-passionate as a result of playing RIVAL 5 and seeing their belief about themselves change.”

One day she saw one of her students counting his fingers while trying to do algebra. Martin realized there had to be a better way to learn math that combined fun and learning. “I tossed several 12-sided dice and with an arrangement of numbers that were multiples, I began to make some basic rules for a simple game. My goal was to help my academically low-level students,” Martin explained.

As the students and Martin played the game, the more academically advanced students joined, and the game suddenly became very popular. Her students loved the strategy, skill and chance of the game, and they played it daily and suggested that Martin market it.

Martin decided to pursue the marketing process when she watched a special education student win against a college graduate. “I wanted the game to have ‘quality written all over it,’” she said, restating an oft-quoted exhortation by former Cedarville president Dr. Paul Dixon and her Cedarville professors.

Martin named the game RIVAL 5 and refined the rules and game design in the classroom. “I tested the game on more than 100 people before I pursued producing the game. I found that many children and adults did not like math and had fear or anxiety about playing the game,” she said. “After playing RIVAL 5, they immediately liked it and said they would play it again. I was amazed and inspired by how RIVAL 5 changed the mindset of math-averse players to become math-passionate.”

RIVAL 5 is STEM-aligned for the educational sector and is trademarked for international commerce. With rules written in 39 languages, it is positioned for sale in global markets.

Martin’s initiative has proven to be successful, winning eight awards ― including the 2018 Game of the Year Award for Creative Child Magazine and The National Parenting Center Seal of Approval Award ― and receiving third place in the Ben Franklin’s Big Idea Contest this year. RIVAL 5 is also a top six finalist for the 2018 Stevie Awards “Startup of the Year - Consumer Products Industries” category.

“Every part of this process was very difficult and very complex,” she said. “But the Lord miraculously opened the way at every step.”

“What makes me feel good is seeing students who aren’t good at math and don’t like math, and then they play that game and they’re totally engrossed in it. They don’t realize that they’re learning,” Martin continued. “A definite reward for me has been seeing math-averse children and adults become math-passionate as a result of playing RIVAL 5 and seeing their belief about themselves change.”

Each game piece will soon be entirely American-made, from the dice to the packaging. The game pieces will be made by Coarc, a New York injection molding company that provides employment for mentally and physically challenged adults. The dice and chips are packaged by special needs adults in Lancaster, some of whom are visually impaired. RIVAL 5 is sold online and in several specialty stores in Lancaster.