During his final year at Cedarville, while sorting out the next step in his life, geology major Campbell Bortel ’19 also has the opportunity to preach God’s Word as the Student Government Association Chaplain. At the end of each message, he also shares his own Scripture-inspired poetry from Cedarville University’s chapel stage.

By his own confession, Bortel loves rocks. But he also loves preaching and ministry. How these two will come together remains for him a joyful mystery, but he’s confident in God’s leading. Transition can be unnerving, but Bortel has an answer. Be faithful in the moment, and turn the results over to God.

On any given weekday of the academic year, at 10 a.m. sharp, chapel holds a gathering of more than 3,000 students, faculty, and staff, not to mention chapel’s growing livestream audience and archived presence, which is available to viewers around the globe.

Bortel confessed that preaching is always daunting, but said what scares him most isn’t the size of the audience inside the Dixon Ministry Center, across the country, and all over the world, it’s the gravity of the message. “To stand up there and be a messenger of the Word of God — that’s the daunting part.” In order to bear the weight of that burden, however, Bortel relies on the same faith he applies to his future. Be faithful in the moment. Give the results to God. God’s Word simply spoken, Bortel knows, will not come back void.

Cedarville’s chapel bears a long history of faithfully delivering God’s Word to the students, faculty, and staff of the University. But now that faithfulness, because of the increased reach available via modern technology, is bearing fruit in very faraway places. From chapel speakers to production managers, from online distribution and social media applications, the many hands involved in Cedarville’s chapel all work as one body to make much of the Word of God and the Testimony of Jesus Christ, and to cast that net ever more broadly to a growing in-person and online audience. 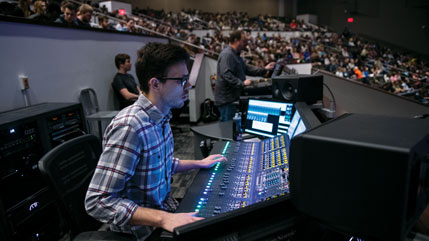 Dave Hoecke ’90, Cedarville’s Media Production and Distribution Coordinator, a 24-year veteran of producing chapel, has a unique perspective on earlier days when chapel had no online presence but aired on the radio. In the last several decades, Hoecke has witnessed and worked hard to help bring the chapel experience from the airwaves to a digital world. Hoecke recounts how chapel’s progression toward its present-day worldwide distribution has been quite the journey.

From chapel speakers to production managers, from online distribution and social media applications, the many hands involved in Cedarville’s chapel all work as one body to make much of the Word of God and the Testimony of Jesus Christ.

“I was fortunate to come into the process in 1994, when digital editing on the computer was already in place. Not too many years before that, someone would have to physically splice a reel-to-reel tape for any edits that needed to be made for the chapel broadcast,” he explained. “A few times a year we would air chapel live, with a live announcer for the intro and outro. Dr. David Matson ’60, a faculty member, was the live announcer, and he would take copious notes and give a great recap during the outro at the end of the service.”

Around 2006, Cedarville began to offer chapels via audio streaming only through the CDR Radio website, in addition to the radio broadcast. “At the time, many people still had dial-up internet connections,” Hoecke said. “As trends shifted, more people became interested in streaming media of all types. Now it’s the only way chapel is offered.”

Chapel is now available via the chapel web page (cedarville.edu/chapel), Apple TV, Facebook Live, and the new Chapel Plus smartphone app, available for download from cedarville.edu/cuChapelPlus.

Hoecke remembered an exciting encounter he had with a student, illustrating the impact of chapel’s digital capabilities. “I had the opportunity to speak with a student who was from Japan,” he recalled. “He said his parents watched chapel live every day. Of course, in Japan, it would’ve been in the evening for them.” From Ohio to Japan, chapel’s livestream capability offers a unique opportunity for parents to share in the daily experience of their student’s life in real time.

Steve Brock ’93, Assistant Director for Live Productions, who runs the chapel production every day, shared this vision of creating and sharing Cedarville’s daily heartbeat. His personal mission and philosophy is “to create environments where people can experience God.” Brock’s hand in the process is all about stage, set, and lighting, and he also has a hand in sound and video, his eyes and ears always tuned in while the live chapel unfolds. “I love being a part of creating moments for people to move closer to God,” said Brock. “That’s the core of it for me.”

Chapel has come a long way from physically splicing audio reels together, and continues to expand as far as online technologies allow. Mark Mazelin ’95, Director of Web Services, has helped lead efforts to expand the chapel experience into emerging technologies. “To be clear,” he said, “getting daily chapel online involves the coordinated effort of many different teams across divisions at the University. It began with Dr. White’s passion for chapel and a Marketing and Communications Division goal to broaden chapel’s reach.”

We will also tie these various systems together so you can access your watch list on any device or have the capability, much like Netflix, where you can start watching chapel on one device, pause it, and then pick it up on another.

Mazelin knows all about today’s digital equivalent of splicing together audio reels. He took the time to describe the nuts and bolts and many hours that have gone into streamlining the systems at work behind the scenes. He also looks excitedly forward to forthcoming venues: 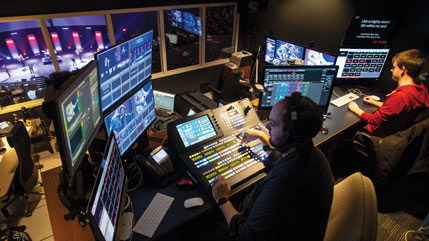 “The livestream of chapel is highlighted and available on our website and Apple TV app during the 10 a.m. hour. Chapels are then tagged with the message title, speaker, topic, and book(s) of the Bible to power the search capabilities and related chapel logic on the website and app,” Mazelin explained. “On-demand plays are tracked to provide a list of ‘Popular’ chapels. Within the app, you can also create a ‘My List’ of chapel services you want to watch later.”

According to Mazelin, the new Chapel Plus app provides live and on-demand streaming of chapel and selected campus events for iOS and Android. “In 2019, we plan to make chapel available via Alexa-based devices like the Echo,” he said. “I’m most excited about this. Imagine being able to ask Alexa for the latest chapel, the most popular chapel, to listen to the live chapel stream, to find the latest chapel by a particular speaker, topic, or book of the Bible, or find out the upcoming chapel schedule.

“We will also tie these various systems together so you can access your watch list on any device or have the capability, much like Netflix, where you can start watching chapel on one device, pause it, and then pick it up on another.”

As could be expected, social media also plays an important role in chapel’s continued impact. Sarah Gump, Cedarville’s Digital and Social Media Manager, spoke to the spirit behind bringing the in-person chapel experience as fully as possible to the online community. “The daily chapel at Cedarville is what makes this campus so special,” she said. “Since we believe in the power of daily coming together to examine Scripture, we also believe in the importance of sharing this experience on social media. The viewers on Cedarville’s Instagram stories love to hear the 15-second clips of their favorite hymns. Families love the opportunity to daily connect with their Cedarville students on Facebook Live.”

Much like Matson, who took notes for chapel recaps in the radio days, Gump takes notes each day for online distribution, one more hand in the many-faceted body responsible for the chapel experience so many enjoy today.

“I attend chapel each day,” she explained. “And my role is selecting a single quote that summarizes the entire message.” She described that task as both “a challenge and a delight.”

On November 16, Bortel opened his sermon on Joshua with an illustration of what his father used to say to him and his siblings during times of transition, such as moving from terminal to terminal in a busy airport.

“Boys,” his dad would say, “this is a moment of transition. Stay close.”

As Bortel speaks, two stories of packed chapel seats rise up in front of him. His image — curly hair and an eager smile, a Bible in hand — is projected onto big screens behind him. On stage sit a handful of guitars in their racks. A white light shines on a red drum set.

Somewhere in that dark auditorium, Brock’s eyes and ears look for angles while video streams through wires and the automated channels set up by hours of work by Mazelin and others. Students’ families from the other side of the planet watch, too, sharing in the experience. Somewhere in the audience, Gump is taking notes.

Bortel goes on to give a sermon about what to do during moments of transition. Like God urged the Israelites, the takeaway is to be faithful in the moment, and leave the results up to God. His Word, simply spoken, will not come back void. As he closes, as he always does with a poem of his own, inspired by that day’s passage, it causes one to reflect on the history, transition, and growing reach of Cedarville’s chapel, a stage from which God’s Word has been read for many years. The opening lines of Campbell’s poem seem a fitting end:

When there comes a transition, a future so daunting

And there’s doubts in suspension, floating and haunting

God speaks to His leader, comfort and command

Be strong and be a reader, Joshua, My promises still stand.

Andrew J. Graff is Assistant Professor of English at Cedarville University. He received his M.F.A. in creative writing from the University of Iowa.