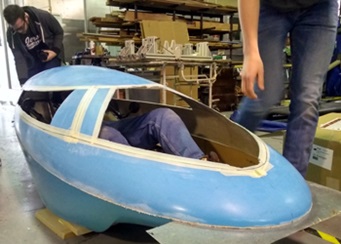 Cedarville University’s shark-shaped car, Karcharias (which is the Greek word for “shark”), hopes to finish well in the Society of Automotive Engineers (SAE) Supermileage competition June 6-7 in Marshall, Michigan, at the Eaton Corporation Marshall Proving Grounds.

The engineering design goal for SAE Supermileage is to develop and construct a single-person, fuel-efficient vehicle that operates as long as possible on one gallon of gasoline. The vehicles will run a specified course to obtain the highest combined kilometers per liter (miles per gallon) rating. The vehicle’s designed will also be judged based on written and verbal reports submitted by students.

“Attending this competition allows them to think on their feet when problems arise but also extend God’s love to other teams in need.”

The goal of the international supermileage competition is to create the most fuel efficient car possible. Cedarville’s engineering students designed Karcharias to travel thousands of miles on one gallon of gas. The current record, held by Laval University from Canada, is 3,788 miles per gallon.

Karcharías has a teardrop-shaped body, with two wheels in the front and one in the rear. It resembles a shark, as its name implies.

“This project gives our students real-life engineering experience,” said Dr. Larry Zavodney, senior professor of mechanical engineering and team advisor. “Attending this competition allows them to think on their feet when problems arise but also extend God’s love to other teams in need.”

The most important components to effectively achieve supermileage are an aerodynamic shape, a high-efficiency engine and transmission, easy-rolling chassis (the base frame of a motor vehicle) and skillful driving.

The Cedarville Supermileage Team consists of four sub-teams: body, chassis, electrical/computer and engine/drivetrain. The body team is in charge of manufacturing the external fiberglass body and windows. The chassis team is responsible for designing and manufacturing the tubular steel frame, the steering, suspension, and braking upgrades, and the engine mount.

The electrical team deals with all of the wiring, switches, horn, brake light, and engine starting and stopping; the computer team processes signals from sensors in the car and displays information, such as speed, needed to drive efficiently.

The engine team modified the stock Briggs and Stratton engine to make it more fuel efficient and takes care of all engine and transmission issues.

Together, these teams create and drive an aero-dynamic, fuel-efficient vehicle. To get exceptional mileage, the driver will run the engine for about six seconds taking the car from 11 mph up to 23 mph, and then coast for about one minute.

“Being on the Supermileage team the last three years, as well as leading it this year, has been a fantastic experience,” said Bretz, a mechanical engineering junior. “Leading the team presented many challenges, but allowed me to grow in many ways. This is my first significant leadership position, and provided a springboard for future positions and things I may run into in my career.”