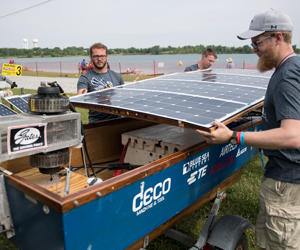 Cedarville University’s Solar Splash team had a four-peat in 2018. Next week, it will strive for five consecutive world championships at the 2019 Collegiate World Championship of Solar Boating.

Cedarville will host the Solar Splash competition June 11-15 in the lake at Champions Park at the Clark County Fairground in Springfield, Ohio. Cedarville is the most decorated team in the field, having won 11 titles during the 26 years of competition. In addition, Cedarville’s engineering students also earned the highest university honor in the 2012 DONG Energy Solar Challenge held in the Netherlands.

"If the students can learn to work within these constraints, then they can take on any job and be successful. They will graduate from Cedarville with confidence to do anything in their job fields.”

The competition pits teams against each another in five water-based events, including sprint and maneuverability qualifying heats. After qualifying, teams will run their watercraft through a solar slalom, an event that tests speed and maneuverability. The remainder of the competition will focus on sprint and endurance challenges. Solar boat teams also receive points for technical reports, a visual display and workmanship.

Through the excitement and fun of an intercollegiate competition, students practice engineering skills in a real-world environment that teaches them about sustainable energy and energy management. With the development of their boat, they learn the value of efficient and effective design.