Professor Models What He Teaches in Run for Public Office 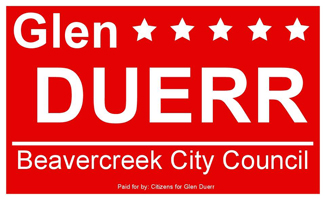 Professors in Cedarville University’s history and government department encourage students to take bold stands for biblical principles by entering the public arena. One professor, in particular, is not just encouraging this idea — he’s modeling it.

Dr. Glen Duerr, associate professor of international studies, is running for a city council seat for Beavercreek, Ohio, a suburb of Dayton, Ohio, about 30 minutes from Cedarville. This year’s election takes place November 5.

“There’s a lot in Scripture about serving and loving one’s neighbors,” said Duerr. “If I’m a believer in Christ, and I want this city to move forward, adopting things that are good, avoiding things that are bad. If those bad things come into the city, I only have myself to blame if I haven’t done anything about it.”

Running for office is new territory for Duerr, who has lived in Beavercreek since 2012, but the politics behind the campaign are something he’s studied and taught for years.

“There are lessons students can glean from my experience, which is always a silver lining to professors.”

Prior to running for city council, Duerr served on the city’s charter review committee and currently serves as the vice chair of the Beavercreek Board of Zoning Appeals. “Since moving to Beavercreek, I have been very active on committees, so, even if I do not win, I am trying to model service in the public arena,” Duerr said.

“We are called to be salt and light in the world,” said Dr. Mark Caleb Smith, chair of the history and government department at Cedarville University. “For some of us, that might mean running for a position. For others it might mean voting or volunteering. Either way, the public square is a pressure cooker. Dr. Duerr knows and understands these things. We are proud of him no matter the outcome.”

He is a frequent expert source for local media, explaining complex international issues such as Brexit.

Outside of lecturing on secessionism or conducting research on international politics, Duerr likes jogging through the neighborhood thinking of ways the city could improve the lives of its citizens.

“I actually believe in being an academic on the ground, not an ivory tower academic,” Duerr said. “Talking with people, looking at things, running through areas to see how businesses could be good for Beavercreek and how citizens can be safe.”

There are four candidates running for three open seats on the city council.

“Even if the results don’t go my way, at least I’ll have a great lecture on how to lose an election and what not to do,” Duerr said. “There are lessons students can glean from my experience, which is always a silver lining to professors.”

Located in southwest Ohio, Cedarville University is an accredited, Christ-centered, Baptist institution with an enrollment of 4,380 undergraduate, graduate and online students in more than 150 areas of study. Founded in 1887, Cedarville is recognized nationally for its authentic Christian community, rigorous academic programs, including its Bachelor of Arts in International Studies program, strong graduation and retention rates, accredited professional and health science offerings and high student engagement ranking. For more information about the University, visit www.cedarville.edu.