The Center for Biblical Apologetics and Public Christianity is pleased to sponsor the God Revealed Apologetics Conference at Cedarville University on March 27, 2019. This one-day conference will equip Christians to think carefully, biblically, and pastorally, about how we can live, model, and share the Gospel in a broken world. Registration is not required.

You can purchases a Backstage Pass for only $10, which includes a free book and priority seating to both the afternoon keynote address and the live recording of The Briefing. 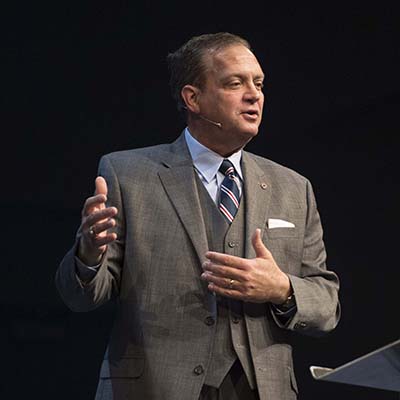 Dr. Mohler has been recognized by such influential publications as Time and Christianity Today as a leader among American evangelicals. In fact, Time.com called him the "reigning intellectual of the evangelical movement in the U.S."

In addition to his presidential duties, Dr. Mohler hosts two programs: "The Briefing," a daily analysis of news and events from a Christian worldview; and "Thinking in Public," a series of conversations with the day’s leading thinkers. He also writes a popular blog and a regular commentary on moral, cultural and theological issues. Called "an articulate voice for conservative Christianity at large" by The Chicago Tribune, Dr. Mohler’s mission is to address contemporary issues from a consistent and explicit Christian worldview.

Widely sought as a columnist and commentator, Dr. Mohler has been quoted in the nation’s leading newspapers, including The New York Times, The Wall Street Journal, USA Today, The Washington Post, The Atlanta Journal/Constitution and The Dallas Morning News. He has also appeared on such national news programs as CNN’s "Larry King Live" and "AC360," NBC’s "Today Show" and "Dateline NBC," ABC’s "Good Morning America," "The NewsHour with Jim Lehrer" on PBS, MSNBC’s "Scarborough Country" and Fox’s "The O’Reilly Factor."

He is the author of several books, including We Cannot Be Silent: Speaking truth to a culture redefining sex, marriage, & the very meaning of right & wrong (Thomas Nelson); Conviction to Lead: 25 Principles for Leadership That Matters (Bethany House); Culture Shift: Engaging Current Issues with Timeless Truth (Multnomah); and Words From the Fire: Hearing the Voice of God in the Ten Commandments (Moody). From 1985 to 1993, he served as associate editor of Preaching, a journal for evangelical preachers, and is currently editor-in-chief of The Southern Baptist Journal of Theology. He has contributed to over 100 other published works.

“Is God Really Like Christ? Martin Luther on the Promise of the Hidden & Revealed God”

“Nature, Red in Tooth & Claw: How Beauty Shows the Failure of Naturalism”

“What Hath Athens To Do With Cedarville?”

“These Things Have Been Written: Did the New Testament Authors Think they Were Writing Scripture?”

“Jesus and the Failures of the Church: How the Church Share the Gospel In Light of Our More Embarrassing Moments”

“The Qur’an Revealed: Revelation in the Religion of Islam”

“God Revealed in Language: The Value of Biblical Languages for Christian Life and Ministry”

“What the Bible Says About Gender”

Registration is not required for this event; however, you can purchase a Backstage Pass, available for $10 per person, which includes a free book and priority seating to both the afternoon keynote address and the live recording of The Briefing.