Dr. Sullivan serves as Professor of Pharmacy Practice and Director of the Center for Bioethics. He has been at Cedarville University since 1996.

Before coming to Cedarville, Dr. Sullivan served as a medical missionary with Baptist Mid-Missions for three years in Haiti and three years in the Central African Republic. He is a member of several organizations, including the American Medical Association, the Christian Medical Association, and the Center for Bioethics and Human Dignity. His research and writing interests include biomedical ethics, moral philosophy, and reproductive ethics.

Dr. Sullivan is actively involved in his church as a Sunday school teacher. He has also taken groups of students to Chad, Africa, and to the Central African Republic through Cedarville’s Missions Involvement Service. In his spare time, Dr. Sullivan enjoys woodworking and racquetball. He and his wife, Barbara, have three daughters, Julie, Jenny, and Joy. 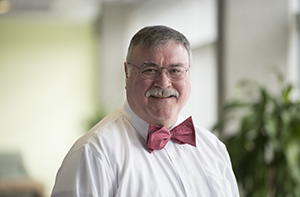