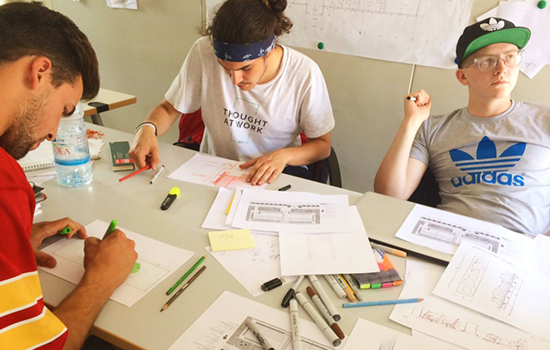 Friday, November 11, 2016
For the second year in a row, a team of Cedarville University students in the industrial and innovative design major will take part in a design and innovation internship at the Kosovo Leadership Academy (KLA) in Mitrovica, Kosovo. The internship was created by, and is sponsored by the International Center for Creativity (ICC), Cedarville’s partner in delivering the IID major.

In the spring of 2015, 1987 Cedarville University graduate Nadine Hennessey, contacted ICC president Jim Stevenson, asking for assistance in developing an innovative curriculum for KLA, which Hennessey founded in 2009. Stevenson, CEO JD Orr and CFO Tom Balliett were inspired by her vision for the people of Kosovo, and committed to a country visit in the fall of 2015. During that trip, Stevenson, Orr and Balliett taught classes on design, innovation and creative problem-solving, met with business leaders and lectured at universities throughout Kosovo.


"We couldn’t have asked for a better team of young people to go and represent the program. They truly engaged and experienced the culture and the people, built friendships for life and laid a foundation on which future groups can build."

The experience led them to create the design and innovation internship program.

During the summer of 2016, a team of IID majors (Drew Brandt, class of 2017, from Huntsville, Alabama, Tyler Willis, class of 2016, from Midland, Michigan and Tom Waters, class of 2016, from Lancaster, California) and ICC team member (Trayton Ojala, class of 2014) spent two months in Kosovo this past summer teaching courses at the academy, creating design camps for local students, engaging with students at the University of Mitrovica, taking academy students on a camping and hiking trip and even designing the atrium of KLA’s new school building.

“We couldn’t have asked for a better team of young people to go and represent the program. They truly engaged and experienced the culture and the people, built friendships for life and laid a foundation on which future groups can build,” said Stevenson.

Stevenson added that ICC is planning to send a new team of students to Kosovo in summer 2017.

“It’s exciting to have found an opportunity to impact a nation, support a great partner, and provide students with a life-changing experience,” Stevenson said.