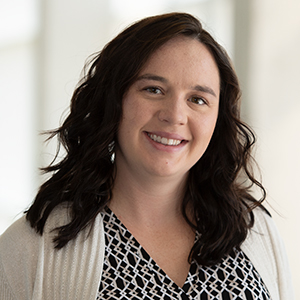 While serving in a pharmacy fellowship, working as a pharmacist and being a mom, Dr. Katie Perry, a Cedarville University pharmacy alumna, also decided to open her own independent pharmacy from scratch. With help from her family, Perry hopes to bring a personal touch to healthcare in Germantown, Ohio, near where she grew up.

“One of the doctor’s offices in the town reached out to my mom and was talking about how much they missed having a hometown pharmacy to work with,” Perry said.

"Cedarville’s School of Pharmacy is so amazing that after spending seven years there learning from the pharmacy team, I wanted to be like them."

Her family encouraged Perry to take this step, and they helped her as she prepared to open the pharmacy. Woodard currently works at the store as does Perry’s brother, Luke, a Cedarville finance student from Camden, Ohio. Her sister, Abby Woodard, also from Camden, plans on joining her after graduation from the Cedarville University School of Pharmacy in May 2022.

“Cedar Care really altered my view of pharmacy as a whole because I started to see the ways that we could care for people differently,” Perry said. “When I'm working at chain pharmacies, a lot of the things that I do are on a timer, and so they're assessing how quickly I’m doing each thing and how long it takes me to check a prescription.”

”With an independent pharmacy, you can have great relationships with the patients and you have more time to talk to them and get to really know them,” said Abby, currently a fourth-year Cedarville pharmacy student.

While at Cedar Care, Perry helped administer flu and COVID-19 vaccines and filled prescriptions. She was also involved with medication therapy management, helping patients with drug side effects and simplifying drug regimens for those concerned about mixing medicines.

"Cedarville’s School of Pharmacy is so amazing that after spending seven years there learning from the pharmacy team, I wanted to be like them,” said Perry, specifically mentioning Dr. Thaddeus Franz, Dr. Aleda Chen, Dr. Justin Cole and Dr. Jeff Huston.

“They hold you to a really high standard, like being on time, being professional. They hold you to those standards so that when you get out onto the job, that's not something new.”

In addition to her studies, Perry also played on Cedarville’s women’s softball team. She learned teamwork and how to depend on the knowledge and expertise of others to accomplish goals. The softball team’s head coach, Wes Rowe, also impacted her, leading times of worship with the team that helped answer questions Perry had about her faith.

Opening a pharmacy can be hard, but Perry said that she saw God open doors. She was able to find a building in Germantown with much of the equipment and layout she needed, down to the safes and shelving.

Germantown Pharmacy opened in June after months of preparation. The reception from community members has been positive. Both Perry and Abby hope to eventually open more independent pharmacies like the one serving their hometown.

Located in southwest Ohio, Cedarville University is an accredited, Christ-centered, Baptist institution with an enrollment of 4,550 undergraduate, graduate and online students in more than 150 areas of study. Founded in 1887, Cedarville is one of the largest private universities in Ohio, recognized nationally for its authentic Christian community, rigorous academic programs, including the Doctor of Pharmacy program, strong graduation and retention rates, accredited professional and health science offerings and high student engagement ranking. For more information about the University, visit cedarville.edu.