Pharmacist Heading to Africa With Samaritan's Purse After Graduation 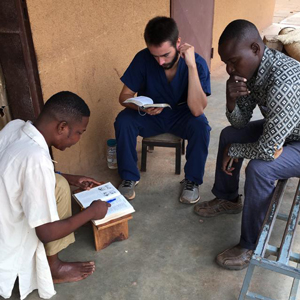 Jake Grasser, a fourth-year professional pharmacy student at Cedarville University from Reinholds, Pennsylvania, is gifted with two unique, and seemingly unrelated, talents: a remarkable memory for the names and function of medications and the ability to reflect on the Bible and how it applies in real life.

These talents will serve him well when he begins serving as the first overseas pharmacist for the World Medical Mission Post-Residency Program, a division of Samaritan's Purse.

“Ultimately my goal is to use pharmacy for the gospel,” said Grasser. “That’s the reason I went to Cedarville.”

After Grasser graduates in May 2021, he will participate in Samaritan Purse’s orientation. He will later attend a year of language school in France before being placed in West or North Africa for two years.

"I had never been to Africa before, but it felt like home, and I knew the Lord was calling me to Africa.”

“This position is a bridge between school and getting on the mission field,” explained Grasser. “Oftentimes it takes two or three years for people to raise funds to go overseas, but this position just lets you go.”

Grasser has wanted to be a pharmacist since he was in fourth grade, but he started to doubt this career choice during his sophomore year of high school because he felt the Lord calling him to ministry. The following year, Grasser decided that he could use pharmacy for ministry purposes.

At Cedarville’s annual Fall Bible Conference during Grasser’s freshman year, Pastor J.D. Greear, senior pastor at the Summit Church in Durham, North Carolina, challenged Grasser and the student body to allow the Lord to send them wherever the Lord willed. Grasser accepted this challenge.

With that decision made, Grasser pursued mission experiences with Cedarville’s Global Outreach, going on several mission trips, including one to Africa.

“The first time I stepped off the plane in Africa, I knew that was where I needed to be,” said Grasser. “There was this sense of peace that is very hard to explain, but it washed over me. I had never been to Africa before, but it felt like home, and I knew the Lord was calling me to Africa.”

In the summer of 2019, Grasser spent four weeks in Togo with Samaritan’s Purse. He then flew to Mali for six more weeks with Global Frontier Missions.

When Grasser begins his work with Samaritan’s Purse, he will work in a pharmacy. The role he will perform is much like pharmacists in the United States; the difference is that once a prescription is ready, Grasser will personally deliver the medication and sit down with patients for a consultation session.

“We can give them pills, antibiotics, or an IV, but that's just putting a band-aid on the problem, which is sin,” said Grasser. “I want to share with them the hope found in Jesus Christ.”

“C.S. Lewis talks about how there is no such thing as a mortal man,” Grasser continued. “Everyone that I talk to is either going to spend eternity in heaven or eternity in hell. I like to keep that in mind as I try to work the Gospel into every conversation I have with my patients.”

Another goal for Grasser while he’s in Africa is to ensure that the medical staff at the pharmacy follow the guidelines set by different accredited institutions. During his previous visits to Africa, Grasser did this by typing weekly reports for the staff and educating them about proper procedures.

“God has opened up these huge doors before me: pharmacy at Cedarville, then Africa, and now as a missionary with Samaritan’s Purse,” said Grasser. “Jesus is worthy of our entire life. Giving up every comfort and every western convenience that we have is not a sacrifice because there's so much more joy and so much more satisfaction that comes when our entire lives are set on Christ.”

Located in southwest Ohio, Cedarville University is an accredited, Christ-centered, Baptist institution with an enrollment of 4,550 undergraduate, graduate, and online students in more than 150 areas of study. Founded in 1887, Cedarville is one of the largest private universities in Ohio, recognized nationally for its authentic Christian community, rigorous academic programs, including its Doctor of Pharmacy program, strong graduation and retention rates, accredited professional and health science offerings, and high student engagement ranking. For more information about Cedarville University, visit www.cedarville.edu.