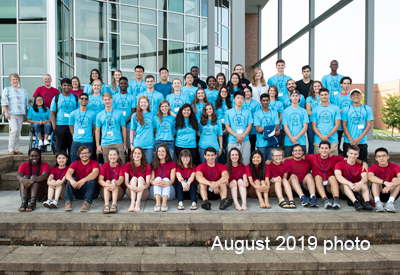 According to Dr. Andrew Harris, assistant professor of communication at Cedarville, having undergraduate research accepted to professional conferences is a testimony to the value and quality of work conducted by Cedarville students.

“Although they are undergraduate students, their work is being evaluated anonymously alongside students in master’s and Ph.D. programs."

“Although they are undergraduate students, their work is being evaluated anonymously alongside students in master’s and Ph.D. programs,” said Harris. “To present research at any conference, at any level, is always an honor for that student.”

A classwide interest in how Christian universities communicate with and serve international student populations inspired Van Veldhuizen, Pinnow, Feathers and Musgrave to pursue the subject outside of their qualitative research class. They used an interview-based research method to gather data from university peers.

“The research process requires us to ask participants for their own cultural views rather than assuming we know who someone is based on their looks or where their parents are from,” said Harris. “While that seems like a really basic lesson, it’s one we so often forget. People choose to use the shortcut of visual cues, and there are many times when those don’t work.”

Van Veldhuizen explored the visual paradox of third culture kids, such as the children of missionaries, whose physical appearance may not match their cultural identity. Pinnow researched how missionary kids transition from their home culture on the mission field and adapt to the American culture of a university. Harris, Feathers and Musgrave examined how an individual integrates multiple cultures into their identity.

“I think, as Christians, part of working in and engaging culture, especially academia, involves doing the kind of work that meets and exceeds the standards set by our secular fellows,” said Musgrave. “The research guided and overseen by Dr. Harris is an example of that.”

Harris added that equipping students to do excellent work in both academic and professional fields is a matter of training his future colleagues.

“What excites me the most about working with Cedarville students is that I’m training the people who will eventually become my replacements,” said Harris. “One day I won’t be Dr. Harris to them; I’ll just be Andrew. That will be the fabulous reward for the hard work we are doing together right now.”

Located in southwest Ohio, Cedarville University is an accredited, Christ-centered, Baptist institution with an enrollment of 4,550 undergraduate, graduate, and online students in more than 150 areas of study. Founded in 1887, Cedarville is recognized nationally for its authentic Christian community, rigorous academic programs, like the Bachelor of Arts in Communication program, strong graduation and retention rates, accredited professional and health science offerings, and high student engagement ranking. For more information about the University, visit www.cedarville.edu.