Training the Next Generation of Leaders in Kosovo 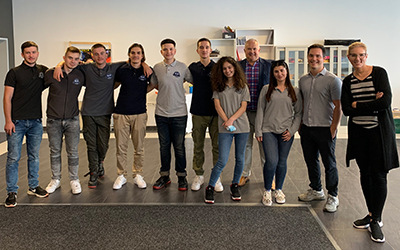 In 2015, Nadine Hennesey, director of the Kosovo Leadership Academy (KLA), reached out to Jim Stevenson, president of the International Center for Creativity (ICC), looking to bring innovation to the newly established KLA.

That initial visit spawned a six-year partnership between the ICC and KLA that has continued to grow deeper and stronger. The ICC partnered with Cedarville University in 2010 to deliver the Industrial and Innovative Design major, and the KLA is a private K-12 STEAM (science, technology, engineering, arts and mathematics) academy.

“Kosovo is a young country that’s establishing itself, and it needs future leaders."

Stevenson and ICC staff travel to the KLA every year, and Stevenson just returned from his most recent trip.

During this trip, Stevenson inspired entrepreneurship by helping students to “get an idea out of their heads and into the marketplace.” One way Stevenson and members of the ICC team helped the KLA students was by having the students pitch their ideas in a class setting. Once the ideas were communicated, the ICC team worked to refine the proposals and provided prizes for the best ideas.

“Over my past trips, I’ve realized these kids have great ideas, but they just don’t know how to organize them, turn them into business models or how to pitch,” Stevenson said. “So I’ve been working with them on Zoom and having some tutoring and mentoring opportunities with students.”

Hennesey, a graduate of Cedarville, first came to Kosovo in 2001, shortly after a war devastated the country. Before that, she had been teaching at an orphanage in neighboring Albania. “After the war, there was nothing for the kids,” she said. “Schools were a terrible mess.”

In response, she founded an after-school learning program called the House of Laughter. After years of teaching there, she began to plan the KLA, a school that would produce the next generation of Kosovo’s leaders.

“Kosovars are really good at languages, and so they are translating other people’s ideas, but I want our students to create those ideas. I want them to be able to design new things because jobs here depend on it,” Hennesey said. “I was on the internet looking for ideas and ways we could bring innovation into our school, and I Googled ‘innovation and creativity,' and the International Center for Creativity popped up.”

With the developing relationship between the ICC and KLA, both Hennesey and Stevenson are working on initiatives that will bring the ICC to Kosovo on a permanent basis. Stevenson would also like to host KLA students at the Columbus-based facility.

In the short term, the ICC plans on helping the KLA run Kosovo’s first STEM fair in April 2022.

“Kosovo is a young country that’s establishing itself, and it needs future leaders,” Stevenson said.

Located in southwest Ohio, Cedarville is one of the largest private universities in Ohio and offers undergraduate, graduate, and online programs to its 4,550 students. Cedarville is recognized nationally for its rigorous academic programs, including the Bachelor of Arts in Industrial and Innovative Design, strong graduation rates, accredited professional and health science offerings, and high student engagement.