The farewell concert for Mike DiCuirci, M.M., senior professor of music, takes place Sunday, April 17, at 3 p.m. in the Dixon Ministry Center. DiCuirci will lead the Cedarville University’s symphonic and jazz bands — along with 150 alumni from both bands — for the final time in his 37-year career. The event is free of charge and open to the public.

“I’m really looking forward to seeing and working once again with many of the students who I’ve taught over the last four decades,” said DiCuirci, who will retire this year.

DiCuirci helped shape Cedarville’s music department into a nationally acclaimed program. He founded the jazz and symphonic bands while, many people believe, developing the most respected pep band in Ohio small-college history.

He has served as the coordinator for the University’s annual community Christmas concert and Veterans Day chapel, two of the biggest musical celebrations in the area, and oversaw chapel music from 1996-2010.

“Mike DiCuirci has greatly shaped the musical climate at Cedarville,” said Beth Porter, M.A., chair of the department of music and worship. “His excellent teaching has equipped countless students to teach with meaning, purpose and conviction, and his testimony and transformed life have been used by God for the glory of His kingdom.”

In addition to the Alumni Symphonic Band and Alumni Jazz Band, the concert will also feature a performance from Brass and Ivory, a duo that features DiCuirci on low brass and Charles Clevenger, D.M.A., senior professor of music, on piano.


The Four by Grace Quartet will also perform during the concert. The quartet includes DiCuirci, along with University employees Robert Reid, Pat Estepp, and Jeff Beste. 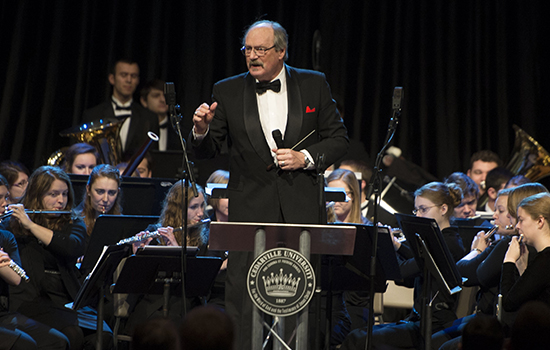 A farewell concert for Mike DiCuirci will take place on April 17.