Friday, May 5, 2017
With a record-breaking 796 students earning college degrees at Cedarville University’s Doden Field House on May 6, many students have unique stories of their college journey. None of the stories, however, can match the tale of Tara Winter’s quest for her bachelor’s degree in sociology.

It’s taken Winter 21 years to complete the curriculum that grants her a bachelor’s degree in sociology. But it’s been a process worth pursuing for her, and it will be the last sociology degree awarded to any student at Cedarville University, as the program was discontinued in 2013.

In 1996, she entered Gordon College in Massachusetts as a freshman elementary and special education major. After her sophomore year, she married Ken Winter, and her educational plans were changed.

Early in their marriage, the Winters had their first child, a severely premature daughter who needed extreme medical care. Instead of focusing on a full load of college courses, Tara Winter focused on her young daughter while taking one class at a time at a local community college. The health concerns for her daughter also led her to change her major to nursing.

When Ken Winter became Cedarville’s assistant men’s soccer coach, the Winter family moved to Cedarville where Tara Winter accepted a position as the licensure, testing and accreditation coordinator for the school of education. This transition allowed her to coordinate her schedule and take one class every fall, spring and May/summer term. She planned to continue pursuing nursing at Cedarville, but she learned her previous nursing credits would not transfer. At that point she decided to study sociology because of its focus on culture, people and life. As a result, Tara Winter believes this academic discipline has helped her better understand the role of the church, and it will help as she takes the Gospel to people from diverse cultures and histories.

Why, after so many years, did she continue to pursue that degree? “I had so much invested in it, and I love learning,” Tara Winter said. “I loved the Bible minor, and the professors here are phenomenal. Cedarville understands biblical integration and training students to impact the world.”

She also wanted to set an example for her three children, showing them how to remain faithful when they start something.

“God’s plan is not easy,” she offered. “Your trust in God has to be bigger than your trust in your own plan. Although God’s plan is hard, he still loves us, and he changes plans to use us, shape us and grow us in ways we often don’t understand. Rely on him to direct you, and don’t hold so tightly to your own plans. God’s love doesn’t fail us.”

Her story is a reminder that none of our graduating students could reach graduation on their own. “I needed the support from others: my husband, my coworkers and my professors,” she said. “It’s been quite the journey, but it has taught me more about myself than I thought I could learn. I am incredibly humbled and thankful I was able to do this at Cedarville.” 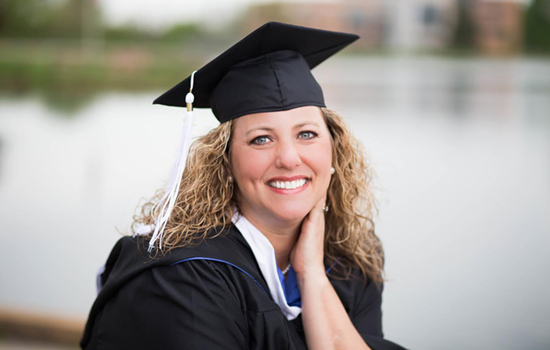 Cedarville staff member Tara Winter will receive her diploma as part of the graduating class of 2017 during Saturday's commencement.