History has recorded the importance of chapel in maintaining Cedarville University’s commitment to the Word of God and the Testimony of Jesus Christ. Without question, the major factor in preserving the sanctity of the 10 a.m. hour for corporate campus worship has been the godly leadership of Presidents Jeremiah, Dixon, Brown, and White.

The daily chapel services have been a dynamic part of Cedarville University’s schedule since the beginning of the Baptist era in 1953. Every University president has valued the importance of this aspect of campus life. 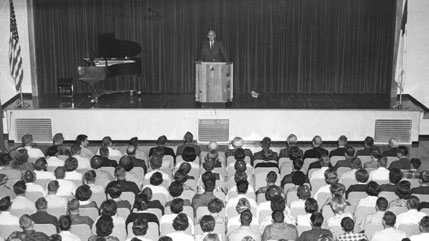 In a personal interview with his biographer, James T. Jeremiah said, “We must never lose the preaching in chapel that has something to say about Christian living, salvation. Never, and if we do we have lost the whole thing.”

Jeremiah was deeply concerned for Christian colleges that were minimizing or de-emphasizing their chapel program, along with succumbing to the mounting pressures of secularism. “Those schools that have gone down that road have stopped having chapel, and that has done them in,” he offered.

“We must never lose the preaching in chapel that has something to say about Christian living, salvation. Never, and if we do we have lost the whole thing.”

During the early years of his tenure, Jeremiah took an active role in preaching in chapel, while also bringing multiple pastors, missionaries, evangelists, and Christian leaders and faculty members to preach in the midmorning chapel services.

Among those President Jeremiah invited to preach was Pastor Warren Wiersbe. Jeremiah would return the favor in kind, filling Wiersbe’s pulpit at Calvary Baptist Church of Covington, Kentucky, which Wiersbe pastored from 1961 to 1971. Older Cedarville alumni doubtless remember those days when they reflect on the fact that Dr. and Mrs. Wiersbe have determined that the renowned Bible teacher’s library will be housed at Cedarville University in the future. 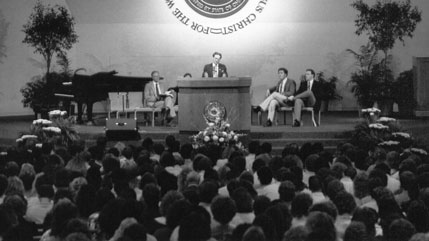 When Paul Dixon was inaugurated as President of Cedarville College at homecoming in 1978, he was eager to establish his priorities quickly. He conducted a study of colleges that had once been faith-based schools, but had lost their mission. He discovered that many of these institutions began to select trustees for financial reasons rather than a strong biblical emphasis. This led these same trustees to call presidents who were not strong Christian leaders and faculty members who did not have a strong faith base. For these and other reasons, these schools put less emphasis on chapel.

On other occasions, as schools enlarged their student body, they outgrew their chapel, and did not want to use hard-to-find resources to build a bigger chapel building. So, instead, they minimized the number of chapel services held each week and often stopped requiring attendance altogether.

Cedarville’s presidents determined early on that meeting space would not be the determining factor for chapel, but rather a commitment to faithfully pour into the University family from God’s truth. The greatest building project of all is the construction of a biblical worldview in students’ hearts driven by a love and devotion to the Lord Jesus.

This led Dixon to conclude that the “primary responsibility of a Christian college president was the chapel service.” Historically, the direction you give the chapel ministry determines the future of the institution. “The heartbeat of every Christian college is what happens in chapel,” he said. 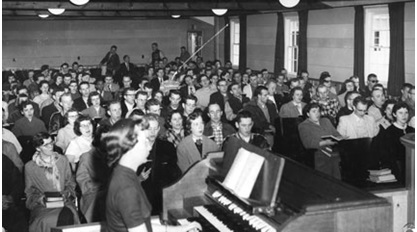 It was Dixon who set aside Monday as the President’s day in chapel. He then arranged for a wide variety of speakers to minister Tuesday through Thursday, while Friday was set aside for student chapel, as well as faculty and department meetings.

In addition to his dynamic preaching, multiple generations of Cedarville students remember with fondness Dixon’s frequent admonition to stamp everything they did with quality. He frequently closed the chapel program with his favorite hymn, Christ Is All I Need. The campus relived that experience leading up to Cedarville’s 2018 homecoming weekend, when that beloved song was played once more at chapel when Dixon spoke.

“Chapel gives you the pulse of the whole University."

The presidency of Bill Brown continued the chapel emphasis. Monday remained as the president’s day, and Brown spoke on a regular basis. Brown came to Cedarville from the academic community and frequently spoke of the value of chapel in the educational process, stressing in particular a Christian worldview. 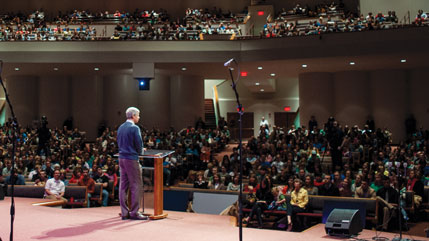 Few who experienced Brown’s emphasis on worldview will fail to recall his use of pop culture to call attention to the spiritual needs of a secular culture or the President’s desire to have the student body pray for members of that culture, as Brown sought to reach them with the Gospel.

By the time Thomas White was chosen to be President of Cedarville University in July 2013, the chapel hour was so deeply embedded in the Cedarville culture that it influenced the calling of the new President. White describes himself as “a preacher who serves as a college president.” He stated, “I was called to preach. I don’t think I would be at Cedarville without the opportunities to preach provided by chapel.”

Students have already been treated to many challenging and inspiring messages by White, including his constant encouragement during the 2017–18 school year series on Proverbs that “God is faithful. You can trust Him.”

According to White, chapel is vital to the spiritual health of Cedarville. “Chapel gives you the pulse of the whole University,” he affirmed.

This belief is consistent with White’s background. He is the son and grandson of Baptist preachers and holds a Ph.D. in systematic theology. Before becoming President, he served as Associate Professor of Systematic Theology at Southwestern Baptist Theological Seminary. He has taught graduate classes in systematic theology and advanced expository preaching.

It is no accident that the chapel hour has always been at 10 a.m., which White describes as “the best hour of teaching in the whole day.” Because of this conviction, White puts significant time and resources into chapel. His emphasis is on a high view of Scripture that gives an appetite for textdriven sermons. This focus on Scripture is consistent with the University’s commitment to the inerrancy and inspiration of Scripture. He further indicated that the congregational singing must be biblically text-driven.

Such an emphasis ensures that the student body, as well as the faculty and staff, are being fed by the truly nourishing and wholly satisfying pure milk of the Word (1 Pet. 2:2), which will lead to spiritual maturity and health. 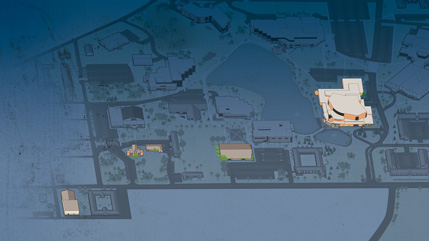 Another vital aspect of this iconic daily chapel is the opportunity it provides the college President to connect with the student body. Chapel allows the Cedarville University President to promote and encourage a sense of family unity among a student community that has grown steadily since 1953, and is currently in its 12th year of expansion. But as the University has been blessed with phenomenal growth, it has become more difficult.

The direction you give the chapel ministry determines the future of the institution.

It was this commitment that caused the University to move chapel from a tiny building that now houses the history and government department to the historic Alford Auditorium in 1963. When Alford became too crowded, two chapel services were conducted daily, which detracted from the desired sense of community, so a new 2,000- seat Jeremiah Chapel was introduced in 1976. By September that year, the student body exceeded 1,200 for the first time.

As the student body continued to grow, the chapel located in what is today the Apple Technology Resource Center also became too small, leading to satellite chapels and eventually the addition of the Dixon Ministry Center, which included a new 3,400- seat Jeremiah Chapel. This facility was remodeled in 2016 and will be expanded again this summer.

Instead of drifting away from the emphasis on chapel, as the pattern of so many once-Christian colleges has been, at Cedarville the 10 a.m. hour is increasing in importance. White, drawing on the experiences of his predecessors and his own background, has vigorously added to the emphasis of the chapel hour. His Monday messages this year are in-depth studies from the book of Ephesians.

Because White views chapel as the “prime teaching time of the day,” he dedicates significant time and resources to the chapel hour. When he assembles the chapel schedule, he considers carefully the “cycle of the semester.” Therefore, he schedules the heavy topics early. As the semester moves into the difficult days and the students become weary, lighter chapels with a worship or testimonial emphasis are added.

White wants the students to “have fun and see their administrators in a more relaxed context,” so chapels like “Live at Ten” are included, set with the purpose of teaching biblical truth in a variety of formats. As he considers his preaching in chapel and organizing other speakers, White reflects on how God can take a man called to preach and turn him into a college President.

Many people have called Cedarville University the best-kept secret in Christian education. Through the years, the presidents have used the chapel hour to not only acquaint students with outstanding preachers and teachers, but also to let people see the amazing sense of community and family that exists on the campus of this outstanding University. Truly, chapel is the heartbeat and pulse of our family. May it ever be so.

J. Murray Murdoch is Cedarville’s Distinguished Professor of History and former Chair of the Department of History. He received his Ph.D. from Northwestern University.