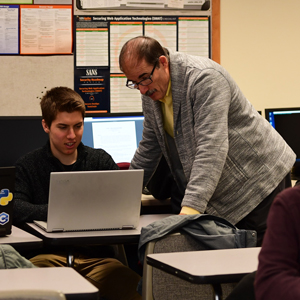 Cedarville University’s computer science major with a cyber operations specialization has been ranked 18th in the nation according to the Bachelor’s Degree Center.

“We are on the cutting edge of cybersecurity next to big name schools, which is exciting."

Over the past 10 years, Cedarville has seen an increase in enrollment in the computer science major with its cyber operations specialization. “We are on the cutting edge of cybersecurity next to big name schools, which is exciting,” said Dr. Seth Hamman, director of the Center for the Advancement of Cybersecurity.

Cedarville's academic administration has taken steps to offer a major in cyber operations. A proposal was presented to and approved by the university's board of trustees last month. Pending external approvals, the program could begin in the fall semester 2020.

“We want to build on our success,” said Hamman. “Once approved, the new major will be the first of its kind in Ohio at the bachelor’s degree level. We want to continue pushing forward.”

At Cedarville, students are taught about the importance of character in cyberspace. “Faith is at the center of everything we do at Cedarville from the classroom to the dining room to the dorm room,” said Hamman. “Character counts in cyberspace because temptation and opportunity are always present and in any kind of cyber operations engagement, absolute trust is implicit because accountability is limited.”

The National Security Agency (NSA) named Cedarville University a National Center of Academic Excellence in Cyber Operations in 2018, a designation that only 21 other schools in the United States currently hold.

“We are in the conversation at the national level, which is remarkable for a smaller school in a rural area,” noted Hamman.

Located in southwest Ohio, Cedarville University is an accredited, Christ-centered, Baptist institution with an enrollment of 4,193 undergraduate, graduate and online students in more than 150 areas of study. Founded in 1887, Cedarville is recognized nationally for its authentic Christian community, rigorous academic programs, including its Bachelor of Science in Computer Science - Cyber Operations Specialization program, strong graduation and retention rates, accredited professional and health science offerings and high student engagement ranking. For more information about the University, visit www.cedarville.edu.