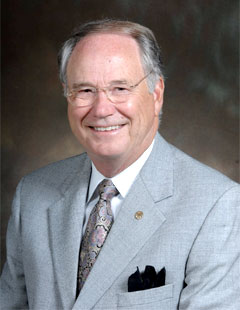 Dr. Paul H. Dixon became Chancellor following a 25-year tenure as President of Cedarville University. Today, he serves the University through preaching and speaking engagements and developing friends and partners to support Cedarville.

Dr. Dixon became the eighth president of Cedarville College in 1978. A graduate of Tennessee Temple University and Temple Baptist Theological Seminary, Dr. Dixon spent 14 years as an evangelist before becoming president. In 1986, while president, he earned his doctorate in higher education from the University of Cincinnati. He also holds an honorary doctor of divinity degree from his alma mater, and the honorary doctor of laws degree from Liberty University in Lynchburg, Virginia.

A glance at the 25 years of Dr. Dixon's presidency reveals great achievements for Cedarville University. But Dr. Dixon would be the first to say that the only explanation for Cedarville is God. The success of the University may be due in part to Dixon's God-given ability to balance stability and change. Without fail, Dixon has kept the University in step with its credo — "for the Word of God and the testimony of Jesus Christ" — and its mission — "to provide an education consistent with biblical truth." Faculty and staff have named his strong emphasis on chapel and his challenging sermons as two of the most significant characteristics of his presidency. His evident, passionate desire for students to take part in the Great Commission never waned. Under Dr. Dixon's leadership, daily required chapel continued to be a priority on campus.

Yet the very opposite of stability — change — has been another building block of Dr. Dixon's tenure. With a strong vision and a strategic plan in hand before he even began his job, Dixon has led the University into tremendous growth. In his 25 years, $100 million in facilities have been built on a campus that has expanded from 180 acres to 400. Cedarville attained university status in 2000 and offers more than 100 programs, including graduate degrees. Enrollment has blossomed from 1,185 students in 1978 to more than 3,000, and the faculty has grown from 60 to 203. As well, the University's focus on technology positioned it as a leader in the digital age.

As Dr. Dixon came to the conclusion of his 25 years as president, he modeled the life verse which he and his wife, Pat, chose: "The steps of a good man are ordered by the Lord, and he delighteth in his way" (Psalm 37:23). In May 2003, Dr. Dixon became the Chancellor of the University, as the mantle of the presidency was passed to William E. Brown, formerly the president of Bryan College in Dayton, Tennessee. The Dixon Ministry Center, opened in 1996, was named in honor of Paul and Pat Dixon.