Thomas White became the 10th president of Cedarville University on July 1, 2013. Serving in a variety of leadership roles and responsibilities, White has more than a decade of administrative, teaching, and research experience and combines strong leadership with a pastoral heart for ministry while standing for biblical truth.

The Inauguration was held on Friday, October 4, 2013, in the Jeremiah Chapel of the Dixon Ministry Center. Members of the Cedarville family, personal family and friends of Dr. White, and other higher education delegates participated in the formal inauguration ceremony.

At Southeastern Baptist Theological Seminary in North Carolina, White met his future wife, Joy Martin. Joy was pursuing a Master of Divinity in women’s studies. They were married in July 1999. Throughout seminary, White combined theological depth with evangelistic passion, earning both his Master of Divinity degree and a Ph.D. in systematic theology. While studying with astute theologians, he put the Gospel into action by participating in missions and itinerate preaching. In addition, White served as Director of Student Life. During these three years, he oversaw student services and participated as a representative during reaccreditation.

In June 2006, White was promoted and served until June 2013 as Vice President for Student Services and Communications. Serving as an executive leader as part of the President’s Cabinet, his administrative oversight included admissions, communications, international students, the chaplain, student life, financial aid, recreation center, the student center, housing, dining services, media services, and the on-campus conference center and hotel. In this role, White was also involved in strategic planning, accreditation, retention, and fundraising. During his tenure, White enjoyed the challenge of identifying problems, evaluating people, finding the right solution to move forward while minimizing harm, and casting a clear vision while building a successful team.

White has been active in research, writing, and contributing to the academy. Early in his career, he received an academic excellence award and a study grant, which led to him publishing a three-volume series on James Madison Pendleton. White co-authored Franchising McChurch: Feeding Our Obsession with Easy Christianity in 2009 and served as editor of First Freedom: The Baptist Perspective on Religious Liberty, which recently came out in a second, updated edition, Restoring Integrity in Baptist Churches, and Upon This Rock. White has contributed to other books, such as Baptist Foundations, written numerous articles, and is active in social media through Facebook, Twitter, and his blog.

In January 2005, the Whites adopted their daughter, Rachel. Through this adoption, God taught him much about the theological concept of adoption and about a father’s love. In May 2011, God blessed them again with the birth of Samuel. The Whites also have two dogs that they treat like children — Duchess, a German shepherd, and Jacket, a golden/Labrador retriever mix. 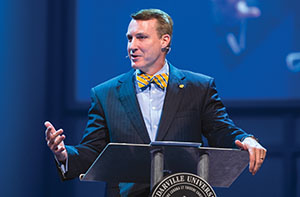