Timothy “Chad” Winder (’06) and Natalie (Plunket) Winder (’07) both chose to pursue music careers early in their high school years. They both decided Cedarville was the best place to pursue those career choices. Chad graduated with a B.M. in Church Music and Natalie with a B.M.E. in K-12 Music Education.

These years at Cedarville were extremely fruitful in their personal and professional lives. After a wedding in the summer of ’06 Chad jumped right in to ministry involvement at churches in the Dayton area while Natalie was finishing her degree. The two had decided more than two years earlier that what God had called them to do when they were finished with their degrees was to work with WorldHelp’s Children of the World Choir, which visits Cedarville for chapel almost every fall.

God granted that ministry wish and for 10 months they toured the United States states with 16 adorable children from the Philippines, Uganda, and India.

Since they left WorldHelp as full time staff, Natalie has stayed extremely involved with the choir, actually compiling and producing their last CD in Nashville, and designing the choreography and programs for the last 3 years. Natalie now works with the children’s choir at their church as well. In addition to raising two beautiful children of their own, Natalie also gives private piano lessons to children in the area.

After leaving WorldHelp Chad took a full-time position as a Worship Pastor in Pennsylvania and 4 years later God moved them back to Ohio to fill a full-time Worship Pastor position just east of Columbus. Chad has been given the opportunity to lead worship on a large scale for several special events including the Southern Baptist Convention of PA’s annual state convention, multiple associational meetings and conferences, a CU alumni chapel, and most recently events being held by the Metro-Columbus Southern Baptists in preparation for the upcoming National SBC convention in Columbus. Chad knows that because of his training and relationships with Cedarville staff, he has been uniquely equipped to deal with the rigors that full time ministry can bring to a person and their family. He also believes that the worship environment at CU is a large part of his desire to aid people in having authentic experiences with God through worship.

Chad and Natalie have two children and are part-way through an international adoption in the Philippines. They are excited to be in the center of God’s will and be able to use their gifts and training to their utmost potential. Timothy "Chad" Winder ‘06 and Natalie (Plunket) Winder ‘0 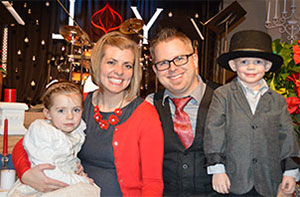