Cedarville University graduate David Lawhead returns to Cedarville as Associate Professor of Music Education after 25 years of teaching in Florida’s public and private schools. David ’82 and his wife, Gail (Gromacki) ’83, met at Cedarville while singing in the chorale. Mr. Lawhead’s first teaching assignment took him to St. Petersburg, Florida, where he taught K–12 vocal music at Keswick Christian School. Gail taught English for several years, and then piano in the home after their children were born. They have three children. Sarah, 25, graduated with a music education degree from Palm Beach Atlantic and resides in Jupiter, Florida. Jenna, 22, is currently pursuing a degree in pharmacy at Cedarville University and will graduate with the inaugural class of 2016. Jesse, 19, is a freshman at Cedarville and is majoring in English. “One of the great things about education is the opportunity to spend time with your kids,” Lawhead says. “I have enjoyed the chance to teach all three of my kids in the classroom. I hope my kids would agree that it was pretty special.”

As an educator, Mr. Lawhead has taught every level from kindergarten through college. As the choral director for St. Petersburg High School, Mr. Lawhead’s choirs consistently received superior ratings at festivals and enjoyed a busy concert schedule.

Mr. Lawhead maintained a voice studio as an adjunct instructor at the St. Petersburg College from 1995 until his move to Ohio in 2013. In addition, he served several churches in the St. Petersburg area as music director, both full and part time.

In his spare time he enjoys following the Tampa Bay Rays. He also enjoys traveling, cycling, and spending time with family. David Lawhead ‘8 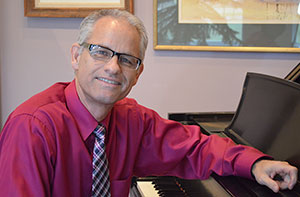