When Rachel Dremann Schmoyer entered Cedarville University, she didn’t really know what career to pursue, only that she wanted a solid foundation in piano. Four years later, Schmoyer graduated with a double major in piano performance and keyboard pedagogy, and immediately entered graduate school with the same focus at the University of Oklahoma. Today, Schmoyer is passionate about using piano pedagogy as a way to reach out to people, fostering both a love of music and important life skills.

After completing her education, Schmoyer remained intensely involved in the music scene in Oklahoma. A member of the Music Teachers National Association, she held a position on the local and state organization boards for several years. She is a sought-after adjudicator, and her students participate in Guild, Federation, and District and State Achievement Auditions, as well as several other locally sponsored events. She also served as director of the Fine Arts Academy of First Baptist of Norman, taught as Adjunct Professor of piano at Oklahoma Baptist University, developed her own collegiate and children’s group curriculum, presented workshops to local music organizations, and taught over 40 private students weekly.

At Cedarville, Schmoyer feels that she received outstanding training in all aspects of music. The comprehensive piano pedagogy program prepared her for professional teaching and business success, and the high standard for academics ensured a thorough and well-rounded education. But just as important as the academics, she was able to witness first-hand the way professors care deeply about their students’ spiritual growth. Cedarville’s musically nurturing environment paired with the ongoing challenge to grow in Christ gave Schmoyer the bigger perspective on teaching music – it is not a job, it is a ministry.

Schmoyer recently resigned her various positions as she follows her husband on an international move. She is excited to see what new musical adventures and lasting relationships will result! Rachel Schmoyer ‘07 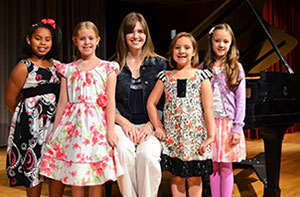