When Taylor Nelson (’13) entered Cedarville University to study voice and music education, he came from a strong background in music. A state and regional level NATS finalist, he was excited to pursue music at the collegiate level. His plans for the future came to a screeching halt, however, when his vocal doctor placed him on voice rest for two months of his freshman year. Unable to sing, speak loudly, or even call his family on the phone, Taylor questioned who he was at the deepest level. Through this time of vocal rest, the words of Jesus in John 12:25-26 became real to Taylor. “The one who loves his life will lose it, and the one who hates his life in this world will keep it for eternal life. If anyone serves Me, he must follow Me. Where I am, there My servant will also be. If anyone serves Me, the Father will honor him.

These words challenged Taylor to love and pursue Jesus more than his “life” as a singer. Through this experience at Cedarville, Taylor learned that Jesus has called all believers to an identity much deeper than their gifts and talents—He has called them to an identity in Himself. Taylor learned that his identify was not determined by his voice, but that it was determined by the blood of Jesus Christ. This fundamental understanding gave Taylor the freedom to pursue singing as a way to know Jesus better and taught him how to use his gifts for the Kingdom of God.

Since graduating from Cedarville, Taylor has returned to be the Choral Music Teacher at his former high school, Northside Christian Academy, in Charlotte, North Carolina. He directs two high school choirs and an a cappella pop group, directs a middle school choir, coaches a contemporary worship band, teaches a music history course, and uses his Spanish minor from Cedarville to teach elementary Spanish. In addition to his teaching load, he directs the music for the high school’s musical theatre productions, and he is actively involved in the school’s mentoring and discipleship programs. Taylor Nelson ‘13 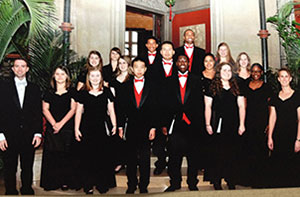