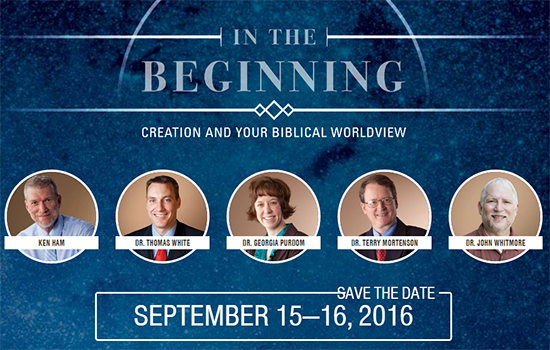 Tuesday, September 13, 2016
Cedarville University, in partnership with Answers in Genesis (AIG), will host In The Beginning: Creation and Your Biblical Worldview, September 15-16 at the Dixon Ministry Center.

The conference, which is free and open to the public, is designed to prepare Christians to defend the literal six-day account of creation and a young earth. The event includes large group sessions as well as smaller breakout sessions with experts from Cedarville and AIG.

“Most Christians have a firm grasp on what they believe, but many are not prepared to defend it and answer the question of why they believe it. This conference will show how scientific and historical facts support the biblical account of creation.”

“Most Christians have a firm grasp on what they believe, but many are not prepared to defend it and answer the question of why they believe it,” said Purdom. “This conference will show how scientific and historical facts support the biblical account of creation.”

Attendees will hear from this expert panel on topics such as the importance of the six-day creation account in higher education, the genetics and theological importance of Adam and Eve and the scientific support behind the worldwide flood taught in the book of Genesis.

“Many geologists believe that their findings disprove what the Bible says,” said Whitmore. “But geology actually confirms the biblical account of creation. It’s my hope that people walk away from the conference knowing that geology isn’t a hindrance to what’s in Genesis.”

There will also be multiple exhibits and displays for attendees to view, as well as the opportunity to participate in a guided campus tour. The first day of the conference includes a concert at 6 p.m. as part of a “family night” event.