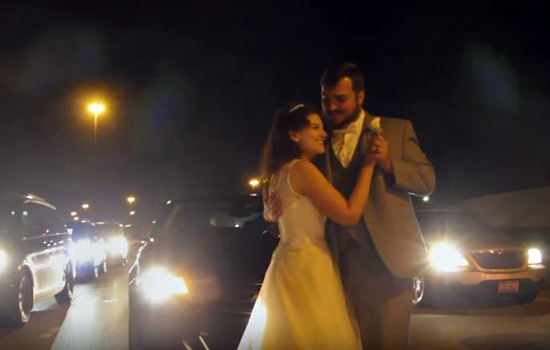 Thursday, December 15, 2016
A bride and groom’s first dance in the middle of stopped traffic has become a global news story covered by news outlets including CNN, ABC, Daily Mail, The Huffington Post and even a news station in Germany. Levi Curby, a 2015 Cedarville University broadcasting and digital media alumnus, and his brother, senior broadcasting and digital media major Caleb Curby, were the videographers for the wedding and captured the dance seen around the world.


"People love it when they see other people making the best out of a bad situation. I think that’s what has made this story so appealing."

On the way to their reception, a traffic accident caused the newlyweds to be stuck in stalled traffic for more than an hour on Rte. 35 outside of Dayton, Ohio. At the suggestion of people in the cars around them, the couple decided to have their first dance there on the highway.
“People love it when they see other people making the best out of a bad situation. I think that’s what has made this story so appealing,” said Levi Curby.

Just over a week after capturing the bride and groom’s first dance, Curby has been contacted by many national and international news outlets and gained almost 40,000 views on two copies of the video, which he posted to YouTube.

Ultimately, it was the training the brothers received at Cedarville that allowed them to think quickly and capture the video that has become so popular.

“My live sports production experience at Cedarville helped me learn to think on my feet and taught me how to record the right thing at the right moment, and that was helpful in this situation,” said Caleb Curby.

“Professor [Jim] Kragel [associate professor of communication], specifically, taught me to always be prepared and to be ready for the moment,” said Levi Curby, “I received so much hands-on training at Cedarville that really prepared me for the future.”