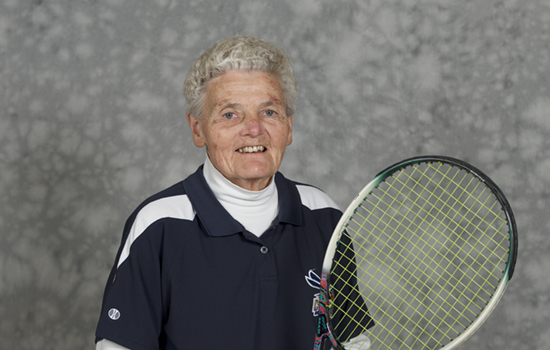 Morris has previously been inducted into the National Christian College Athletic Association’s (NCCAA) hall of fame and Cedarville’s athletic hall of fame. These distinctions were, respectively, for her leadership within the NCCAA and her work with Cedarville’s women’s tennis team. Morris served as assistant tennis coach to Dr. Pam Johnson from 1977 to 2007, when she became the head coach.

Morris attended Geneva from 1955-1959 and was involved in rifle (coed) and women’s basketball and tennis at a time when women’s sports were a novelty.

“I had always desired to play team sports in high school but never had the chance because of the lack of opportunities for women,” said Morris. “When I was given the opportunity to play at Geneva, I do not think there was a ball that bounced that I was not close to.”

Morris was Geneva’s top marksman and in 1958 won the collegiate individual championship. Later in her life, Morris narrowly missed qualifying for a spot on the U.S. Olympic rifle team.

Morris was surprised to hear that she would be inducted into the hall of fame, since she had nominated her coach and mentor, Doris Nevin.

“It is a great honor,” said Morris, “I had the opportunity to know some really great women during my time at Geneva.”

Nevin had a lasting impact on Morris, who preserves her memory through the Doris E. Nevin Memorial Scholarship. The scholarship is given to a rising senior in Cedarville’s allied health major preparing for a graduate program in physician assistant studies.

“Doris deserves the honor more than I,” said Morris. “She exemplified the admonition of Colossians 3:23 – “Whatever you do, do it heartily, as to the Lord and not to men” and taught me by her example, to go beyond what’s required in working with and serving others.”