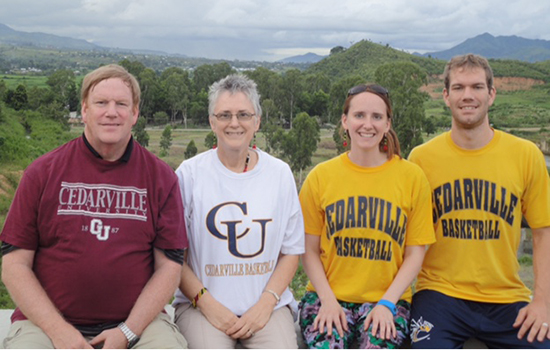 Monday, August 15, 2016
A pair of inspiring stories from two Cedarville University alumni have led to the creation of endowed scholarships for students pursuing a career in education and ministry.

Dr. Donald Shue, a 1967 graduate, has established the Shue-Spears Family Scholarship to honor his late wife, Susan, as well as his parents and in-laws. Shue experienced a series of financial hardships during his childhood and, as a result, was not able to attend college immediately after graduating from high school.

After working for General Motors and saving money, he realized that factory work was not for him and left GM to begin the pursuit of a college degree.

Despite his struggles, Shue trusted Christ’s promise in Matthew 6:33, which says “But seek first His kingdom and His righteousness, and all these things will be given to you as well.”

After his first year at Cedarville, Shue was uncertain whether he could return due to a lack of funds, but he found that GM had placed him on educational leave, which allowed him to return to work each summer.

Upon graduation, Shue accepted a position as a second-grade teacher in Michigan, and spent the next 40 years in education and ministry.

The recipient must maintain a cumulative grade-point average of 3.0, be active in Christian ministries and demonstrate a financial need. The annual scholarship amount will be $2,500.

The second endowed scholarship has been established in memory of Becky (Canine) Overholt, a 1974 graduate who passed away on December 21, 2015, after a battle with cancer.

After graduating from Cedarville and receiving the President’s Trophy, Overholt earned a master’s degree from Purdue University, as well as a second master’s and a doctorate from Rutgers University.

She spent time as a teacher and principal in Indiana, New Jersey, Pennsylvania and Texas, and was on the faculty at Shippensburg University for two years before her health began to decline. She also participated in trips to India and Indonesia to help train teachers.

The Rebecca S. Overholt Memorial Scholarship is available to juniors and seniors pursuing a degree in education. Students must maintain a cumulative GPA of 3.5 and demonstrate a financial need. Preference will be given to children of missionaries.

The scholarship has already received $50,000 in funding from friends and family of Overholt, and the annual award amount will be between $2,000-$2,500.

Cedarville University provides access to more than 250 donor-funded scholarships and a variety of institutional scholarships. More information on Cedarville’s scholarship opportunities can be found by visiting cedarville.edu/financialaid.