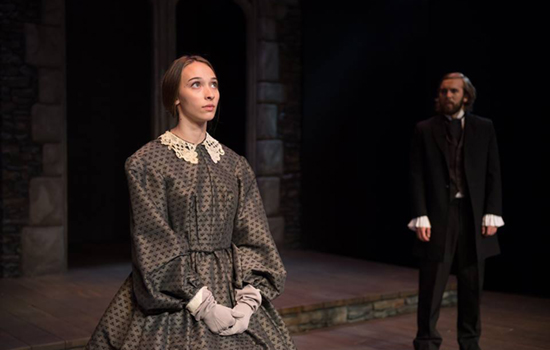 Monday, December 12, 2016
Cedarville University’s fall 2016 theatre production, “Jane Eyre,” has won two Irene Ryan Certificates of Merit and two of its actors are being considered for national awards through the Kennedy Center.


"This recognition really was such a blessing and is an encouragement for me to work harder in my major and to continue to strive for excellence."

Howell was also recognized with two certificates of merit for her work with “Fiddler on the Roof” in 2014 and “Wit” in 2015.

“Designing the lighting for Jane Eyre was such a journey,” Howell said. “It was my first time designing lighting by myself for any mainstage production, and it was also my senior capstone project. To receive an award for my lighting design debut is so significant and I am incredibly thankful for it!”

“Hearing from a theatre professional that my character was believable and spoke to them as an audience member has helped my confidence and my professional development,” said Bauman.

“This recognition really was such a blessing and is an encouragement for me to work harder in my major and to continue to strive for excellence,” added Smith.

“It is quite an honor to be chosen as a nominee,” said Dr. Diane Merchant, professor of theatre and the director for “Jane Eyre.” “Two actors were chosen who had very strong roles, but who may not be immediately recognized as the leads. I liked the idea that every character in the play is important. They were very worthy of this recognition.”