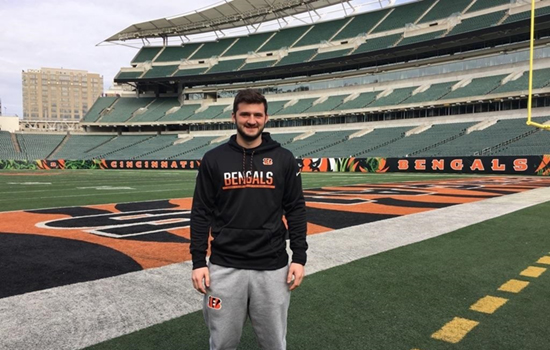 Tuesday, February 7, 2017
Cedarville University’s athletic training program was once again able to make an impact at the highest level of the profession. Through a recently completed internship with the Cincinnati Bengals, junior athletic training major Chris Brown was able to work alongside certified NFL athletic trainers and gain invaluable professional experience.

Brown, from Cedarville, Ohio, began his internship with the Bengals in May of 2016 and continued until the team completed its regular season schedule in January 2017. He was one of four interns, and the only junior in what is typically a senior internship. Brown is the second junior and the third student in recent years that Cedarville University has sent to an internship with the Bengals.

As athletic training interns with the Bengals, Brown and Gruenberg assisted with first aid and management for the team’s practices and games, injury prevention and treatment and rehabilitation. Brown explained that people often misunderstand athletic training as a profession; it’s much more than just handing out water and taping ankles.

“A lot of athletic training is the things going on behind the scenes that people don’t see,” Brown said. “You get to have a relationship with the athletes and walk with them through the whole process, from when they get injured to when they’re able to get back on the field. I think that’s pretty neat.”