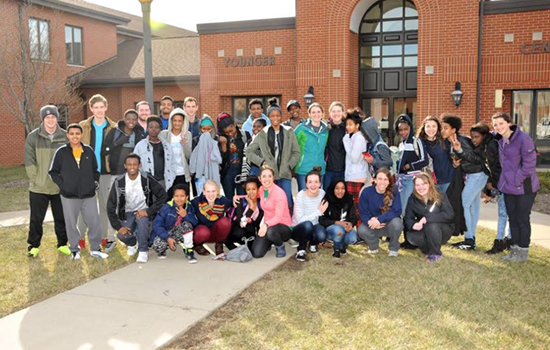 Every Sunday, Cedarville students visit Christ the King Anglican Church to interact with the large African refugee population in an urban neighborhood. Students visit the homes of children (between ages 4 -19) and bring the kids to the church for games, fellowship and discipleship.

The refugee population consists of families from many African countries and cultures. Although Cedarville’s students face a language barrier and pre-existing conflict among children and the children’s strong Muslim backgrounds, they successfully build relationships and share the love of Jesus.


"I want to challenge Cedarville students to look outside of themselves and the campus and take the time to get to know someone who is different than they are. Students are missing out if they are invested only with students on campus and church once a week."

“The children often want to accept what we tell them about Jesus and the Bible, but they also want to hold on to their Muslim beliefs,” said Erika Belmont, a student leader in the ministry.

The children are divided into groups by age for weekly sessions, which are led by student volunteers. The youngest age groups play games and learn Bible verses, older boys play soccer and hold open-ended Bible discussions and older girls do activities and study 1 Corinthians 13.

A few times a year, King’s Kids hosts special events for the kids and leaders. Last semester, they went camping and ice skating, and most recently, King’s Kids brought 21 refugee children to Cedarville University to participate in activities.

Cedarville students hosted the refugee children overnight, played games with the children in the engineering building and held a spa day for the girls.

“I want to challenge Cedarville students to look outside of themselves and the campus and take the time to get to know someone who is different than they are. Students are missing out if they are invested only with students on campus and church once a week,” Belmont said.

More than 20 Cedarville students regularly participate in King’s Kids. The students who attend have a common heart for refugees, Muslims and inner city children.  Since they are a group of like-minded individuals, they form deep relationships with each other and grow as a team.