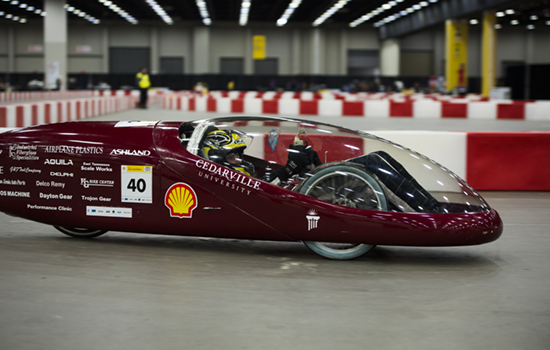 Monday, April 24, 2017
Engineering students from Cedarville University will compete in the 11th annual Shell Eco-marathon Americas on April 27-30 in Detroit. Cedarville is one of the few schools that has participated in the international fuel-efficiency, supermileage car competition every year it has been offered for teams in North and South America.

The Shell Eco-marathon is a competition that encourages engineering students to build, test and drive the ultimate energy-efficient vehicle. Vehicles are categorized into either prototype or urban class, then divided by energy type. Awards are given to the vehicle that can travel the furthest on the equivalent of one litre of fuel, but off-track awards also recognize safety, teamwork and design.


"Supermileage has provided me with the ability to not only apply what I learn in the classroom to the real world, but also to be a part of a team."

Cedarville’s Supermileage team consists of engineering students from every year and major interested in designing, building and testing a fuel-efficient vehicle. The team does not build brand-new vehicles each year, but rather works to redesign and improve previous years’ vehicles.

Students volunteer on Friday evenings and Saturday mornings, but some can work up to 10 or more hours a week on the project. Students are placed on teams that focus on designing and manufacturing the car body, engine, electrical systems and more, but all teams come together for the competition.

“Team members may not know much about what other members of the team have been up to,” said junior mechanical engineering student Mark McTaggart. “At competition, everyone gets to learn the ins and outs of how each part of the car works, and why other members have had to spend so much time in their given area.”

This year, the team is entering one vehicle in the urban concept class and one in the prototype class. The prototype team has improved the aerodynamics, exhaust, braking and suspension of its vehicle. The urban concept team redesigned the car’s drivetrain to include a continuously variable transmission to aid acceleration. Also this year, an engineering senior design team designed a new vehicle that the Supermileage team will build next year.

“Supermileage has provided me with the ability to not only apply what I learn in the classroom to the real world, but also to be a part of a team,” said junior mechanical engineering student and three-time Supermileage team member Shannon Deal. “Over the years, I have gotten to learn a lot of practical skills when it comes to designing parts or using shop machines that I would not have learned if I were not on the team.”