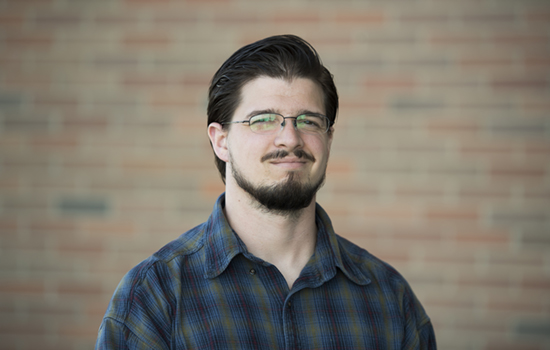 Thursday, April 27, 2017
Jeremiah Pennington, probably wouldn’t be graduating from Cedarville University this coming May if an earthquake hadn’t rocked his world.

Pennington, a senior special education major from Jackson Center, Ohio, joined the U.S. Navy in 2007 after graduating high school. He spent four and a half years in Japan where he served as a responder to the 2011 earthquake.

Pennington had given his life to Christ as a child, but strayed from his faith as he reached high school and while in the military. Seeing the wreckage the earthquake left behind completely changed his world. He was forced to think through serious questions about life and death. Pennington decided to enroll at a school committed to excellent biblical training and turn his life back to Christ. Because of its proximity to family and reputation for biblical integration, Pennington chose Cedarville.


"I feel I have a bigger calling than just teaching; I want to make an impact."

While Pennington found the transition back to Ohio easy, going back to school after six years was challenging. Not only did he have to keep up with a full school workload, but he also maintained a full-time job and family life his entire college career. He and his wife, Hannah, live in Springfield with their four sons, Samuel, Isaac, Malachi and Caleb.

Pennington worked with Cedarville’s grounds crew for three years before starting a job with Adults with Disabilities this past year.

“A lesson that carried over from my time in the military was ‘trust but verify,’” said Pennington. “I learned that it is okay to trust what I’m learning, but to verify it to prove its truth.”

Pennington added, “The biggest lesson I’ve learned at Cedarville is ‘be who God’s called you to be despite what the world wants you to be.’ I’ve had too many experiences of other people saying what you need to be, but I’ve learned that everything will fall into place if you follow God. The journey may be rough, but God will get you through.”

“Over the past four years, Jeremiah has grown into a skilled and caring special education teacher,” said Margaret Grigorenko, assistant professor of education. “Though he arrived with work experience from the Navy, Cedarville taught him to navigate the world of higher education as well as U.S. public education.  He saw the Lord mature him through working on Cedarville’s grounds crew, going through a demanding educational preparation and leading his family. He and his wife learned to manage a relentless and intensive home, school and work schedule, always maintaining their family as a strong priority.”

After graduation, Pennington will serve as an intervention specialist at Fairmont High School in Kettering, Ohio.

“I want to impact kids for Christ who may have rough family lives at home,” said Pennington. “I feel I have a bigger calling than just teaching – I want to make an impact.”