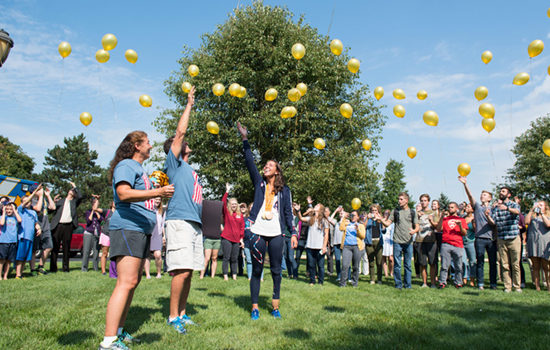 Paralympic gold medalist Grace Norman will be honored by Wright State University prior to the Raiders’ Friday, Feb. 24 basketball game at the Nutter Center. The recognition ceremony begins at 7:15—just 15 minutes before the start of the game.

Norman, a freshman at Cedarville University majoring in nursing from Jamestown, Ohio, won the gold in the PT4 Triathlon and the bronze in the 400-meter sprint at the international Paralympic Games in Rio de Janeiro, Brazil in September 2016.

"When people ask how I do all of this, I can explain to them that Jesus is the one who gives me strength."

Jeff Giles, associate director of athletics at Wright State, says the university’s athletic department wanted to recognize Norman, not just for her success, but for her persistence and hard work to overcome obstacles.

“This is a great way to recognize Grace’s athletic achievements, while also bringing to light our history of helping those with disabilities,” Giles said.

For Norman, the unexpected recognition and publicity that’s come from her athletic accomplishments in the Rio Paralympic Games has been an adjustment. Still, Norman is thankful for the platform it provides to share her story with so many people.

“It’s been a great opportunity to share my testimony outside of Cedarville University because my faith is a huge part of my story,” Norman said. “When people ask how I do all of this, I can explain to them that Jesus is the one who gives me strength.”

Wright State University has long been in the forefront of disability services in higher education. In 1970 the school was one of the first to create an Office of Disability Services – three years before Section 504 of the Rehabilitation Act required any university receiving federal money to make its programs accessible to persons with disabilities, and 20 years before the Americans with Disabilities Act. Today, Wright State’s campus is one of the most accessible in the country. Its tunnel system is believed to be one of the most extensive collegiate pedestrian tunnel systems in the United States as nearly two miles of tunnels link 20 of 22 buildings in the academic sector of campus.