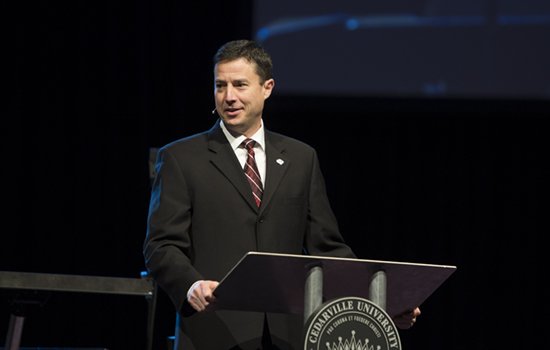 Tuesday, May 16, 2017
The Cedarville University Board of Trustees has approved the appointment of Dr. Thomas Mach to vice president for academics. The trustees approved Mach’s appointment during their meeting on May 5.

Mach has served at the university 17 years as a professor of history and stepped into the role of assistant vice president for academics in 2016. He will replace Lt. Gen. (ret) Loren Reno, who will retire on June 30. Reno will continue to serve as special adviser to Cedarville University’s president and professor of management in the School of Business Administration.

Mach, a 1988 graduate of Cedarville University, returned to his alma mater in 2000 as a faculty member in the department of history and government. He became chair of the department in 2009, a position he held until assuming the assistant vice president for academics role.

Mach served as the self-study coordinator for the university’s reaccreditation in 2007, and in 2015, he chaired the strategic planning committee, where he surveyed current literature on the landscape of higher education, performed a SWOT analysis on the university and wrote the strategic plan. Mach was selected Faculty Member of the Year in 2009.

As he steps into this new role, Mach intends to keep Cedarville’s priorities as strong as they were under Reno’s direction.

“General Reno has served this university faithfully as the vice president for academics,” said Mach. “He kept our priorities straight and was passionate about Cedarville honoring what we say we will do. My goal is to keep our academic programs moving forward in the positive direction they’ve been going under his leadership.”