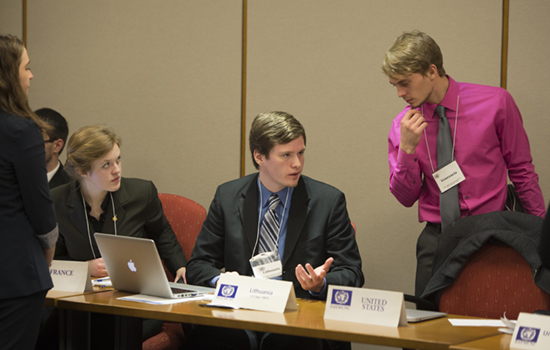 Wednesday, February 1, 2017
For the past two years, Cedarville University’s Model United Nations (U.N.) team has been the clear-cut leader in regional competition. In 2015, the team won five individual awards at the regional event, and last year it claimed all eight major individual awards.

The 2016-17 team will attempt to duplicate this success when it competes at the annual Dayton Model United Nations Conference (DAYMUNC) on February 3-4 at Sinclair Community College. Dr. Glen Duerr, assistant professor of international studies, is the faculty adviser.

"The most important goal of our team is to represent Christ well."

Cedarville’s 16-member team will compete against 150 other students from 10 Midwest universities. It will participate in four different committees, representing nine different countries.

The Model U.N. team began in 2003 under the leadership of Dr. Frank Jenista, professor of international studies and former U.S. diplomat. With each year of events, Cedarville’s team has improved to become a leading contender for top awards. The team had its highest success in 2015 and 2016, achieving “Outstanding Delegation” at the National Model U.N. Conference in New York City in addition to numerous individual awards at DAYMUNC.

“The most important goal of our team is to represent Christ well,” said Duerr, now in his second year as the faculty adviser. “Hopefully our students will walk into a room, be friendly, work hard and show the love of Christ, and it will make a difference in someone’s life.”